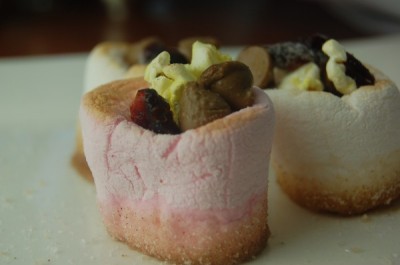 Are you sick of the same old desserts and treats?

Cream of this, flour laden that, butter soaked thingos drizzled with cardiac arresting other stuff. Who needs it?

For me, a toasted marshmallow, done in the fireplace in Winter, and in the barbecue in Summer, and I'm happy. Even under the grill will do in a pinch.

Especially now that I want to be the new me. The me that's slender, fit, healthy and here for 45 more years.

Alien looks aside, these belong in everyone's dessert repertoire, and untoasted and lined up in a box, make the perfect gift.

The girl child took one look at this baby and in her usual, gracious and ever respectful 12 year old manner, said 'you don't expect me to eat THAT, do you?'.

Thus challenged I thrust one at her, straight from the grill and cradled in a spoon. "Try" says I.

Eyes widened at first melt-in-mouth sensation, then closed in bliss as taste buds found warmed cinnamon sugar on the base. A swirl around the mouth released the salty popcorn kernel, along with the craisin and soft gooey choc chips. The final tang of just a couple of crystals of gourmet salt lingered for a second or two, whereupon she didn't even ask for another, but headed straight for ingredients on bench to make several for herself.

Did she ask Fabbo Mother whether she'd like some? No. Did it keep her out of my hair for a few hallowed moments. Yes. Therefore worthy of repeat performance.

Following is the ridiculously and mercifully short ingredients list which will make a hideously bountiful number of Aliens.

1/4 cup water in a shallow cup or lid

Gourmet salt flakes if you wish

If you're making these as a gift, have a box ready to hold them. You will not be toasting them ahead of time. This would look ugly, not taste nearly as good, and elicit response similar to that from the girl child, above. This also means, that you need to include instructions for elevating to heavenly status. Something short and sweet like 'Grill, Barbecue or Toast in the fireplace for 20-60 seconds' would about do it.

Take marshmallow, cut a deep cross into the top with a sharp, pointy knife. Ease an opening into marshmallow with fingers, being careful not to totally destroy marshmallow.

Into the little pocket, squeeze a kernel of popcorn, a couple of choc chips and a craisin. If you're gifting these, do it the other way around. Craisin-ChocChips-Popcorn on top. Secure the popcorn with your Choc spread or Peanut Butter. This just holds it all together. We prefer the choc chips on top if they're going straight from bench to grill to mouth, but it really makes little difference. Heck, once you get a run on these, entire communities could spend a weekend trying to decide which way tastes better.

Dip the base of the marshmallow into the water quickly, then dip it into the flavoured sugar, hot choc or latte` mix.

Set aside, `cause this alien is done.

Consuming is easy. See directions for gift giving and off you go.

For the gourmet type, a last minute touch of a couple of salt flakes after grilling, barbecueing or toasting in the fireplace, is a new kind of devilishness.

Warning: Consuming more than ten Marshmallow Aliens in one sitting is critically unfair to thighs waiting to become slender. Watch out! 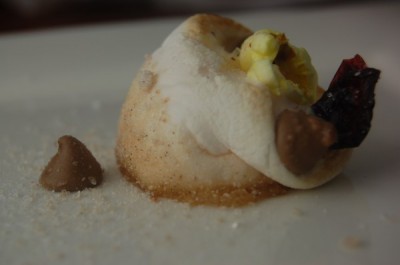