I've just come up with a most glorious way to make pretty marble-like Christmas ornaments.

It all started when I was decluttering and getting rid of some old magazines. I found a tutorial from 1995 (I swear half the stuff on Pinterest and peoples blogs are from their Mums or Grannys Good Housekeeping mags!), on making moulded beeswax ornaments. Well thwarted as I was by having neither (a) beeswax nor (b) fancy chocolate moulds, my brain went into overdrive.

So I did this with some German Ivy I have growing in a pot at the front door. The bonus being that the leaves look a little like miniature Christmas trees.

Then I found a box of household candles in the Emergency kit (it's okay, I only took one!), and my silicone muffin moulds that I actually use for soapmaking.

I cut up one candle and divided it equally between the muffin holes and zapped that in the microwave for 10 minutes on HIGH until the wax melted. I then fished out the bits of the wick with a pair of tweezers and discarded them.

Trimming the stems of the dried ivy leaves, I then popped one into each pool of wax, pressing it to the bottom with a skewer, so that when I pop the discs out, the leaf it visible through the smooth (right) side of the wax.

I left them to cool for about 15 minutes, then carefully, released them from the edges of the moulds first, then popped them out by pressing underneath.

A metal skewer, heated under hot running water, and dried, made neat work of putting little holes in the top for threading kitchen string through. You could use ribbon of course, but I love the rustic look of the string. 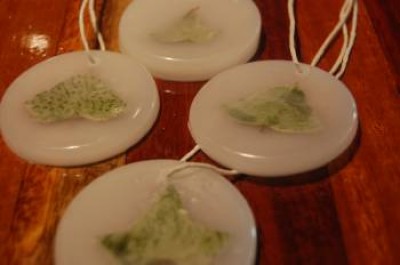 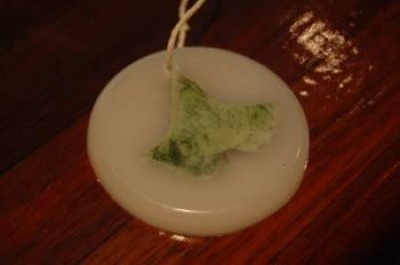 Obviously, you don't have to stick with white candle wax, nor do you have to use dried leaves. But I love these. They look like little marble ornaments and I think they'll make great Teacher gifts this year.