Volunteer plants in the patch…
We have always affectionately called plants that pop up by themselves ferals here but the majority of gardeners I follow on line call them volunteers so for today that is what I shall call them ;)»
One thing I love about the garden is the amount of volunteer plants that pop up randomly.. For the first few years it was nothing but tomatoes but now we are starting to get a bit of diversity to our self sown crops.. This is one aspect of gardening that brings a broad smile to my face every time..
In the aquaponic beds we have loads of volunteer plants everywhere.. 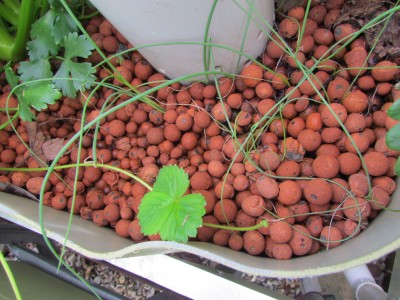 At the moment we have spring/green onions sprouting up everywhere in the system which is good as I mulched over most of the seedlings in the other garden beds.. The strawberries are also sending out runners all through the beds.. I think I shall be collecting them & planting them out into barrels in the patch.. 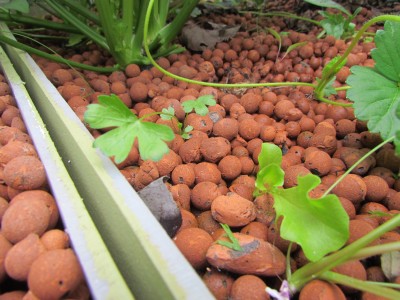 I have been holding off buying more parsley because I really wanted to grow some using our own seed.. I scattered some seeds through one grow bed but I now have them popping up (Left) in all the other beds.. Lettuce (Right) of different types are popping up everywhere in the aquaponics too.. They are from a mixed punnet that were planted out & bolted to seed very fast during summer.. 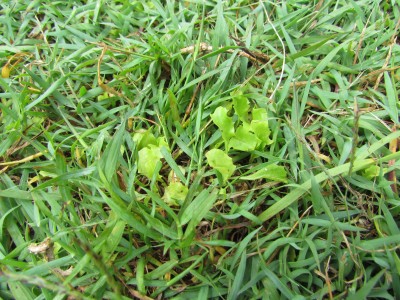 We were sitting on the lawn the other day & noticed that we have some coral lettuce fighting it out with the lawn.. I think they were spread by the wind when we left all the flower spikes in the beds.. The patch of lawn they are in is probably about 1.5m² & it would be great if we get to harvest some from it : )» Hmmm, I may have to build a little fence to stop people walking on it.. It could be a new ploy with Bianca for me to get more garden space.. 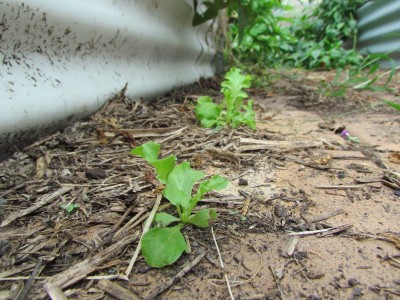 My favourite place to see lettuce grow is from the pavers.. Bianca & I always cheer when we see plants growing through roads, foot paths or anywhere they shouldn't.. Last Winter we picked a fair amount of leaves from the paver lettuce.. 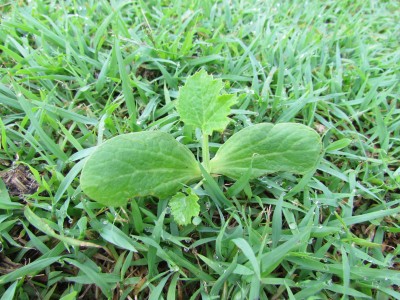 I have no idea what type of cucurbit this plant is but if I had to guess I would say that it is a cucumber or maybe kent pumpkin.. Can't really work out how the seed made it into the lawn but if it wants to grow there I'm happy to give it a hand :D» 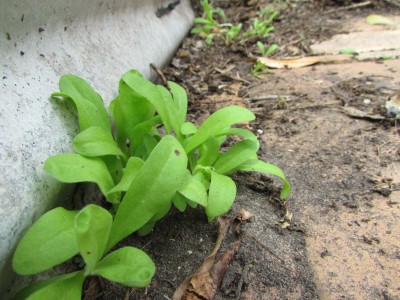 Calendula officinalis, also known as pot marigold, has been another plant that just loves to self seed.. I think we will be transplanting some of the seedlings from the beds to other spots but am happy for the plants growing in the pavers to stay where they are.. There are so many that I think we will be giving some away as well.. 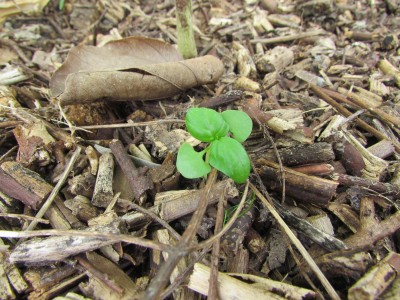 Sweet basil is another favourite that just appears in the strangest of places.. I've only ever intentionally planted basil twice since the garden was first planted out & yet we have always had at least one plant growing somewhere.. I noticed this morning that there are also a number of seedlings popping up under the Thai basil in one of the beds.. 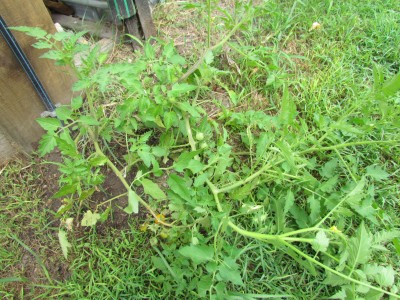 Yellow cherry tomatoes are popping up everywhere... I find that the self sown plants always do better than the ones we plant out.. We have been picking this variety continuously for the past 12 months now.. There are also a few new plants shooting up where the last volunteer plant was growing next to the chook pen.. So I don't have to plant out any tomatoes because I know we will have more in the near future.. 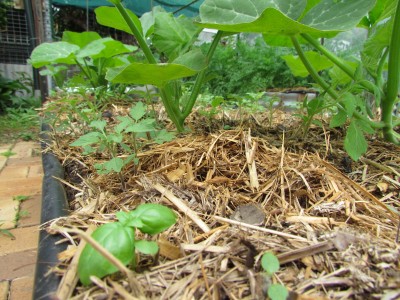 This bed is a real mix of feral veggies & herbs.. It was topped with worm castings a few weeks ago & so far we have numerous pumpkin, sweet basil, eggplant, cape gooseberry, the odd dill plant & a forest of tomatoes.. I feel bad that most of these will end up as worm food but other plants are destined to live here in coming weeks.. 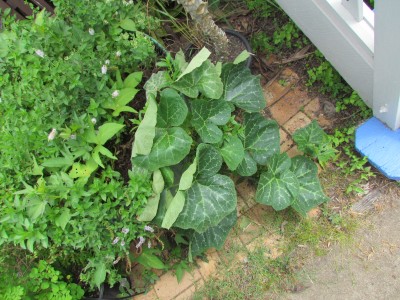 I think we will leave this pumpkin that shot up in Maya's mint garden as all the others ferals in the garden beds will become worm food.. Hopefully it will handle being trained under the stairs & up the side of the house.. That side of the house receives the majority of the winter sun, so it should do well.. 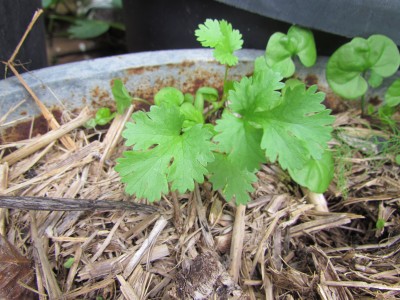 The coriander sort of took me by surprise.. I think this must of shot from a seed that escaped when I was separating some from the flower heads on the back landing.. We have only ever planted 1 lot of coriander yet it continues to pop up all over the place.. The flowers from the coriander along with the basil & calendula are all great at bringing the bees & other beneficial insects into the patch.. 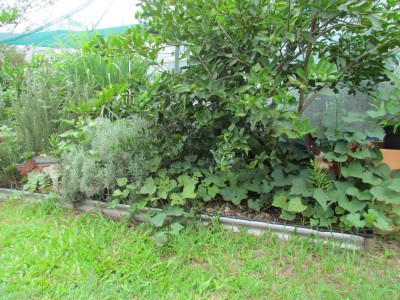 We had a sweet potato sprout in the pantry so I planted it in the lime & herb bed.. It was harvested at the end of last summer & we thought we had removed all the tubers but apparently we had missed a few.. It has since taken over the bed with some of the vine climbing up to the top of the lime & turmeric.. We also have them popping up in the chook yard & they were in an IBC but I pulled them out this morning.. I also have an heirloom variety that really needs to be planted out.. I don't think we will have a shortage of sweet potato this year :D»
We have a few other volunteer plants like the snake beans, herbs & strawberries but I think you get the picture.. Planting open pollinated/heirloom seeds into your veggie garden is one of the easiest ways to grow plants & they will thank you for it by becoming more acclimatised.. As a result they will offer you more produce without the added seed cost or need to prepare seeds or plant starts.. Cant get more SS than free plants :D»

Aquaponic update...
We have been fighting high nitrate levels in the system over the past few months.. As I have mentioned before, this isn't overly toxic to fish but it still isn't good to have them exposed to high levels for extended periods of time.. I have also been a tad concerned about the water quality of late as it has become very murky for no apparent reason.. This has also put the fish off their feed a couple of times.. To help clear up the water & lower the nitrate levels, I made up a solids filter that will take away some of the waste & should help to keep the water clear.. It was a really easy unit to build & it appears to be working fine..
On the plant side of the system, I couldn't be happier.. All the plants are booming including the new seedlings.. I am especially impressed with the Gympie Gold cucumber growth.. I think that it may have something to do with the ongoing adjustments that are being made to the pH.. The pH level is slowly rising towards 7 & is sitting at about 6.5 at the moment..
I have included a bit of a walk around clip if you feel like a sticky beak at the system for yourself.. 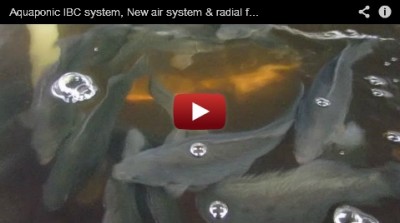 New Seedlings…
A few seeds were planted out late last Sunday & we were very surprised to see that some had shot on Thursday.. 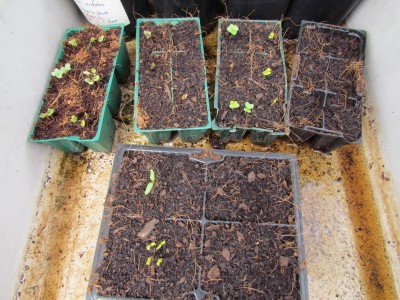 The punnets in the picture have (from top left) cauliflower "60 days", purple kohlrabi, blue curled Scotch kale & at the front is mangle.. The red vein sorrel (far left in the middle) as well as some squash, eggplant & chilies (right up the back) are yet to make an appearance but hopefully there will be enough heat left in the season for them to germinate..
I shall also be planting some broccoli & rainbow chard seeds out this weekend.. Because they will take a while & I wanted to get a head start on the season, I'm thinking of going halves in a punnet of broccoli seedlings with a friend who is building some beds of his own.. The bed they will be going into here is already prepared, so I might just sow them directly to see how they go..

Kira decided that she would like to have a go at growing some apple trees & she popped a few seeds into a small ramekin with some paper towel & surprisingly they shot.. 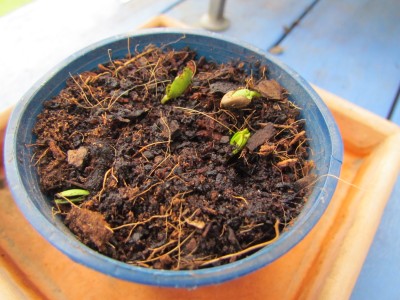 She planted them out into a small pot the other day & they actually look like they are growing rather well.. I think that if they actually grow we might keep one & try to graft a tropical apple onto it.. 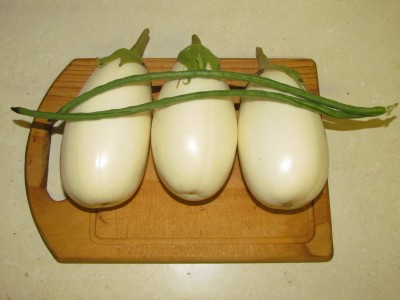 2 of these large white eggplants have already been devoured with another 1 or 2 ready to pick in the next few days.. The first one was cut into "steaks", pan fried & then topped with haloumi cheese that had been sizzling alongside them in the pan.. Another was used by our eldest in her first stir fry.. Was most impressed as she managed to add it just at the right time & it didn't get too soft..

The Thai paste Bianca shared with her work mates was a bit of a hit so we have been asked by a few people to make up some more.. 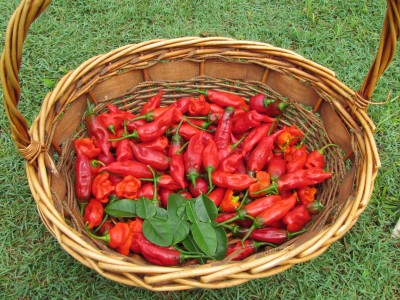 I have been stockpiling the chillies during the last week & Picked the last of them today.. I think the ball chillies are all but finished for this year so will be pulling the plants along with the 2 year old bell chilli plant… The "market" chilli can stay for a 3rd year as it is still growing string & producing loads of fruit.. 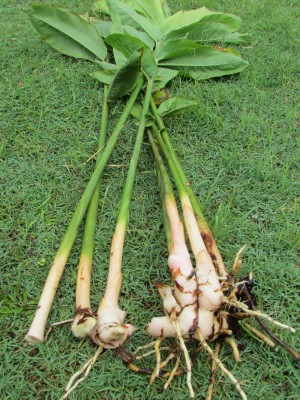 For the paste we also need some galangal so some choice young shoots were harvested this morning.. A few of our friends were kind enough to donate some of their chillies, lemongrass & galangal for the cause so we should have enough paste to share out to all that want some now : )»

Hope you have enjoyed this little wader through the patch..
Hope you all have a great weekend/week in the patch..
Rob : )»