Aquaponic Jobbies..
The trench was finished on Sunday.. **does a very gentle happy dance** The sparky was called & the power was run down to the patch on Wednesday.. The water line was then hooked up to a tap & I was left to fill in the trench.. I am yet to sort out all the power to the pumps & float so that is a small job I can knock off later today.. 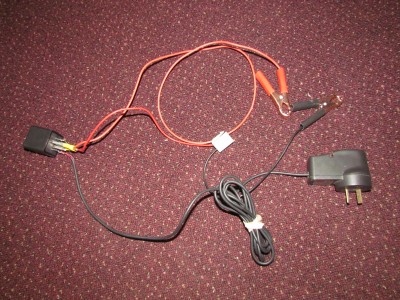 Not very exciting to look at I know but the fish would be most impressed if they could see it methinks.. This system gets switched on via a relay if there is a blackout or someone accidentally turns off the power to the system.. It is all run via a 12volt car battery and I got the OK from the sparky to wire it up myself.. There will also be a battery charger added but that really isn't needed at the moment..

Breeding Crawlies..
Yesterday we made another step closer to becoming more self sufficient with animal feed by setting up a small Black Solider Fly larvae farm.. The larvae make a very protein rich (40%+ protein content) feed for fowl & fish alike.. I had a friend from the community garden come around yesterday & we made up a couple of the farms.. A few different ideas from the internet were gleaned & then used to help make them up..
On the lid of the farm there is a pipe assembly that allows the female flies to come in & deposit her eggs.. We decided to follow the recommendations of experienced BSF farmers & wrap corrugated cardboard around the pipe entering the lid.. 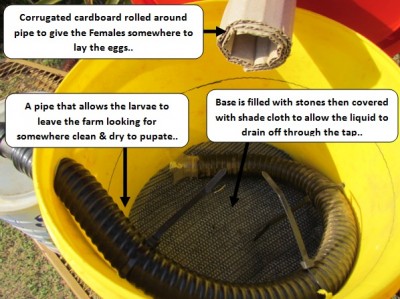 The eggs hatch very quickly (about 4 days) then fall onto the food & start feeding straight away.. They can grow to maturity in about 2 weeks during the warmer months but it can take a few months to "mature" when it is cooler..
I think the best thing about these little crawlers is that they clean themselves off then climb up a ramp in an attempt find somewhere dry & clean to pupate… 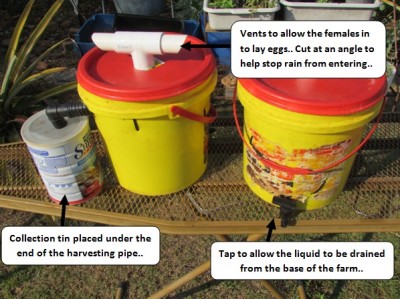 This makes them easy to harvest as they crawl up a pipe then fall down another into a container filled with some dry bedding material like wood shavings or coconut coir/peat.. They stay here until being collected then fed to the fish or chooks.. I think a few modifications will be needed.. I will show these on a clip once the whole farm is finished & the first larvae have been harvested..

Planting out in the patch…
I was gifted a few coconut peat seedling pellets the other day so decided to put them to work as these are great little seed starters & we have had a decent success rate with them to date..
On Tuesday I decided to try out some of the seed we got from the BOGI fair in the pellets.. These included;
Celery "Tall Utah"
Bok Choi
Mustard Greens "Osaka Purple"
Some Eden Seeds Kohlrabi "Purple Vienna" were also planted.. 7 pellets of each were "sown out" into a tray with a little water in the base & noticed on Friday afternoon that the Bok Choi has already started to germinate..
On the same day we also planted out a row of the Bulls Blood Beetroot (BOGI) into bed #1 as well a row of Dragon Carrots (Eden Seeds) into bed #5..
On Thursday, 7 Passion fruit Giant Granadilla (largest of the passion fruit family with fruit up to 40cm in length) seeds were sown into 2 pots.. 2 lots on Mini Lee watermelon seeds were also planted out into 2 of the IBC beds..

Nude up for November..
Bianca suggests that you avert your eyes about now as we are heading into Nude Food month & we have a back yard full of it.. **blushes**
A relatively new phenomena that I really don't understand is the wrapping of veggies like zucchini, beetroot, beans & snow peas onto foam trays.. The waste that is involved with this is rather disturbing to me… I am one of those crazy people that refuses to place "naturally wrapped" bananas into plastic bags & would prefer to check my beans & snow peas to see if they are as floppy as a defrosted squid.. It was recently suggested to me that if bags are required for veggie purchases to grab & use the brown paper mushroom bags as they can easily be composted or fed to worms.. Just make sure that the person at that counter doesn't charge you the mushroom price for your beans.. 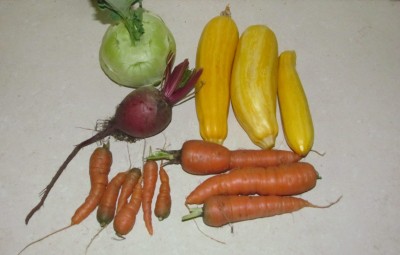 The kohlrabi, beetroot & carrots were all chopped finely in the food processor to make a wonderful raw, Nude Food salad..
We also harvested the second barrel of Garlic.. 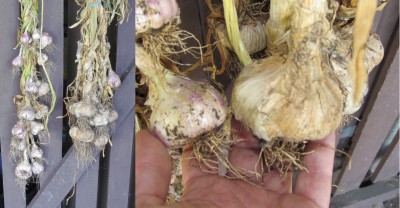 While it didn't grow as large at the bulbs from the first barrel we harvested a few weeks back (bulbs on the right), but it is still a decent crop I think & much better than last year's..

The silverbeet has been growing great guns at the moment.. 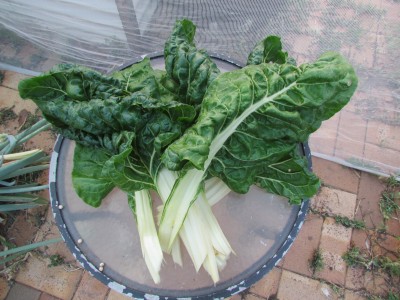 This lot was added to feta, olives, sundried tomatoes & our own garlic & then made into pastries… The chooks have also been enjoying it as well & some have been blanched & frozen for later use..

That's it for this week..
If there is anything you would like me to cover in the next blog let me know..
Have a great one all..
: )»