Gardening talk with Annette McFarlane..
On Saturday a mate & I went along to a free workshop that was put on by the Brisbane City Council at the Inala library.. The speaker was Annette McFarlane & the topic is Growing Organic Fruit and Vegetables.. She spoke on a range of topics including, looking around at what people are growing locally to see what is suitable for you to try, suitable fruits for South East Queensland, protecting fruit trees from bats/possums, sharing crops with neighbours, how she gardens using raised beds/tubs & answered a few questions asked by the audience.. 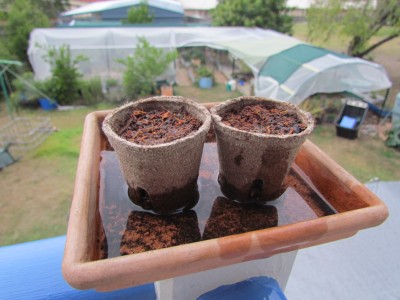 We even got to pot up some Black Russian tomato & Tondo zucchini seeds to bring home..
They were sown into compressed fiber pots then topped with some coconut peat to help keep them moist.. Once they sprout the whole pot can be planted straight into the garden.. We are very quickly running out of room in the patch but shall find somewhere to squeeze these in.. Might just have to dig those new beds sooner rather than later..
I thoroughly enjoyed the talk & would encourage everyone to have a look at the free talks/information sessions that local councils put on.. If you are in Brisbane, Annette McFarlane has a few more sessions listed on this BCC library events page.. Our family has been to some great events put on by the local library..

The aquaponic & pH…
Have had a few issues with the pH falling in the aquaponics over the past few weeks.. This is the one fiddly bit of running a system that can get people into trouble if not monitored..
An aquaponic systems main driving force is the ammonia that the fish create as waste.. I have briefly mentioned the Nitrogen cycle in a previous Blog Entry.. The one side effect of the nitrogen system is that the bacteria also produce a bit of acid which over time reduces the pH of system.. This can lead to a "bacteria crash" if left unchecked as the environment can become too acidic even for the bacteria.. If this happens you can lose the fish as well as all the plants..
With the warmer weather the Jade perch have started to feed really well.. This also means that the bacteria have also ramped up their feeding which means an increase in the acidity & a lowering of the pH.. We have gone from a pH of 7 down to 5.6 in under a month so an adjustment is needed.. After a small panic & quick online search I realised that I had already bought shell grit when we first built the system to help keep the pH balanced.. We also add it to the chooks feed to give them more calcium.. The acid in the water breaks down the shell grit & it raises the pH in the water & adds calcium into the system as well..
I made a small mistake when I added the first bag of grit.. It was tied over a water inlet so the water could flow over the grit & speed up the breakdown process... 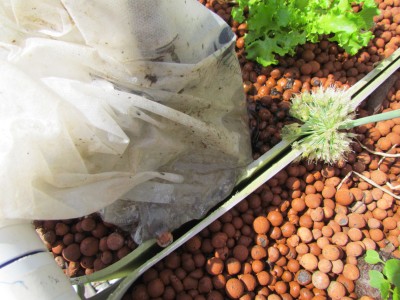 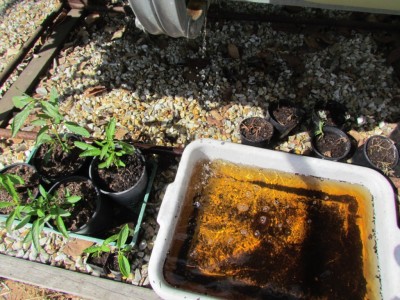 Unfortunately some fish solids blocked up the holes in the bag & it swelled in size until it was hanging over the side of the bed.. It started leaking water into a tray of cuttings underneath & overnight we lost about 300L of water from the system.. We were very lucky that that was all & that it didn't drain out the whole sump tank..
The pH can also be brought up by dissolving 1 tbsp of Calcium Hydroxide (also known as slaked lime, hydrated lime or brickies lime) into a few litres of water then adding that into the grow beds.. Potassium bicarbonate (sold as a mildew/fungicide treatment under the named "Eco Rose" & "Eco fungicide") can also be used the same way as the slacked lime.. These compounds should be used sparingly as quick changes in the pH of the water can be quite dangerous to the fish.. I am only adding one dose a day & checking the pH to monitor how it is moving.. Another benefit of adding these is that aquaponic systems lack calcium & potassium (along with Iron) so this is a great way to get those nutriments into the system as well as boost the pH levels..
On Friday I added some Eco Rose & the pH went from 5.6 to 6.2 in 12 hours so am happy with that... I shall be monitoring it regularly over the coming weeks to see how it goes.. 3 bags filled with grit have been buried under the grow bed inlets so that over time it will keep the pH in check but it will take some time for pH to rise using this method..

Planting out in the Patch…
I got busy with the seedlings last Sunday & a fair few were planted out or potted up.. 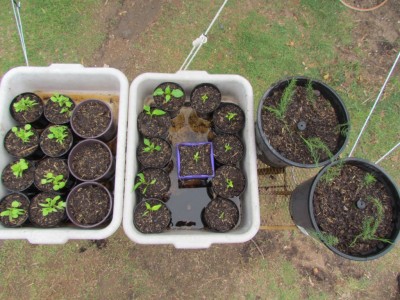 On Friday some of the seedlings that sprouted in the coco peat pellets were planted out into the aquaponic beds.. These included,
7 x bok choi
2 x celery
5 x kohlrabi
1 x mustard green..
Also had a bit of a surprise this week when I checked the tray the seedling punnets have been living in.. 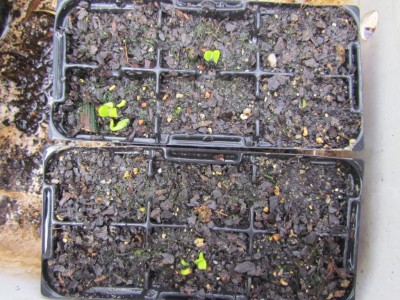 7 of the Yellow dragon fruit have shot.. Woo Hoo!! Am most impressed with this as this variety has been the tastiest we have tried so far.. Can't wait to grow them up & plant them out.. 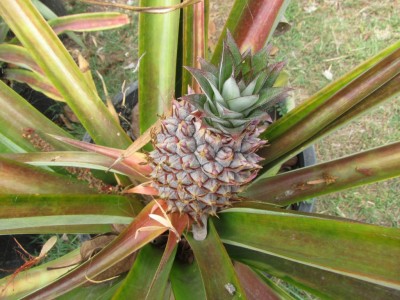 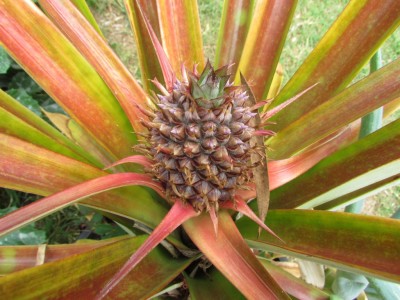 P2
These guys are growing well with P1 looking like it will be ready a few weeks before P2..
Mmmmm, can taste them already..

Harvests from the patch..
This week has seen another great harvest of zucchini & tomatoes..

Most of these were shared amongst friends & family... There are still another 6 or so ready to pick later tonight.. Thinking we are going to end up with a year's supply of zucchini sauce in a few weeks if they keep producing this well.. 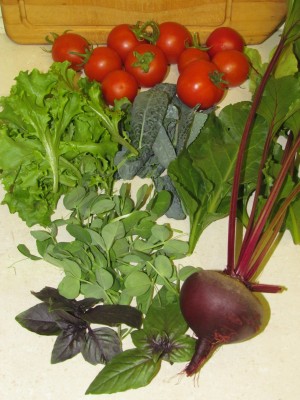 We introduced the girls to kangaroo meat for the first time this week & we enjoyed it in some wraps with fresh salad from the patch.. The pea shoots came from some peas that shot from pea mulch we placed onto a bed.. Makes a great green manure as well as a tasty salad green.. 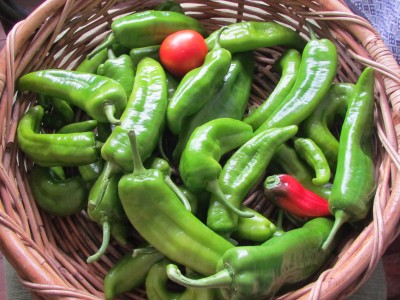 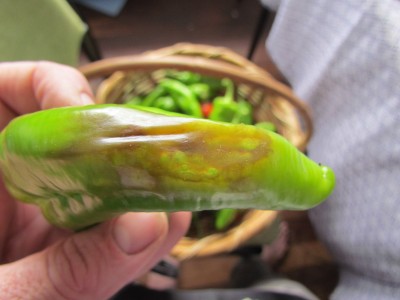 fruit fly strike : (»
I was sure that the traps were put out in time but I think some were already blown when I put them out.. 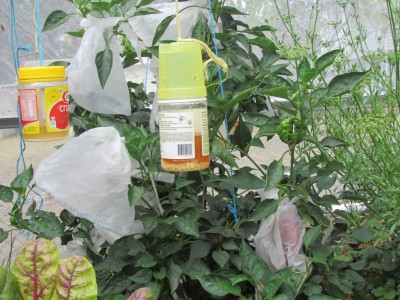 I have now bagged up the majority of the fruit & can see a few ripening up now so that's 1 plus.. I think that the plants in the insect proof hoop house should be well guarded against strike in the coming months, so I am confident we will end up with a bumper crop of ripe ones..
The other plus of them coming off early is that I got to have a go at canning for the first time.. All the damaged parts of the fruit were cut out, a pickle was made up & here is the result.. 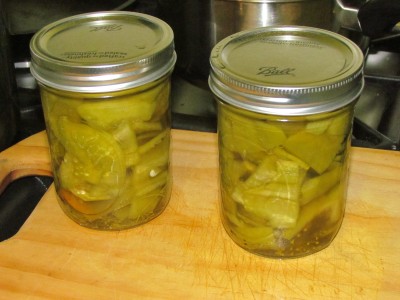 It was a very basic pickle mix made from apple cider vinegar, white vinegar, dill flowers, pepper corns, honey & water.. We are going to leave it another week then open a jar to see how they taste.. Will let you know when we eat them..

That's about it for this week..
Don't forget to check out what free info sessions are put on by your local councils..
Have a great one all..
: )»