Got quite a bit done in the garden over the past week.. Three wicking beds in front of the aquaponics set up were finished on Sunday & one has been planted out already with the 3 remaining purple sprouting broccoli (tar Frogdancer).. The rest of the beds will be planted out as soon as some seeds sprout & the seedlings are ready for transplanting.. A clip was made just to show the process of "wicking" up an IBC.. 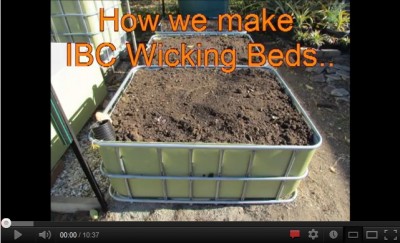 The small wicking bed down the back of the yard was removed & the forth IBC was set up there as a wicking bed as well.. The tin bed that was there just never grew productive plants.. I think the poor performance was a combination of a poorly made reservoir section as well the quality of the soil that was bought in for the bed.. The same soil was put back into the bed after it had been mixed with some composted cow manure & worm castings.. Some extra worm castings will also be added when the Jarrahdale pumpkin seedlings are planted out.. Might also put a single lemongrass shoot back in there just to see how it grows compared to other plantings of it around the yard..

Bathtub Pond...
The Bathtub pond is now filled with water and has been planted out with aquatic plants as well as a container of water chestnuts.. I am just waiting for the sediment to settle before the fish can go in.. 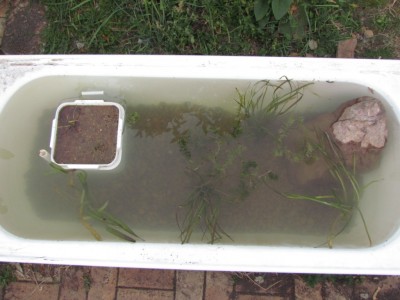 I ended up getting 8 White Cloud Minnows (non natives) as none of the local aquariums could supply the native Pacific blue eyes I wanted.. The White Clouds will take care of any mozzie larvae that get laid in there but will not eat any frog eggs that get deposited.. The 1st chance I get I will be stocking the tub with some blue eyes as I prefer natives & may be able to sell them back to the aquarium.. Hopefully the pond will encourage some beneficial insects as well as more frogs into the veggie patch.. There will be some off cut irrigation pipe added so the frogs have somewhere to hide.. At the moment there are some white lipped green tree frogs that have taken up residence in a few wicking barrel pipes so it would be good if we could get them into some new homes.. It will also allow us to fill the barrels through the pipes again..

Clearing the beds…
Time has come to start pulling a few crops to make way for new ones.. The first to go will be the broccoli tomorrow.. These plants have been some of the best broccoli we have grown with only a few going to seed prematurely.. The side shoots have been harvested for a few weeks now & it will be a shame to have to start buying it again.. Going in their place will be some bush beans down 1 end & a zucchini up the other.. The only fertilising the beans will get is a handful of worm castings.. It is a good idea to take it easy on the nitrogen fertilisers with beans as they can take nitrogen from the air & fix it in their roots so over feeding means more leaves than beans.. They still need a little so that is why they will get some castings when they go in..

The other plants to come out now will be the snow peas.. I let the powdery mildew get a good foothold so think it is best to take them out now & treat the area with some bicarbonate soda to knock any residual mould spores on the head.. I am planning on planting some spaghetti squash in the bottom trellis bed.. As they can be fairly susceptible to powdery mildew it will be good to give it a spray with the bicarb & then let the bed rest before the seedlings go in.. The other snow pea bed will get the same treatment but I am not too certain what will be going in there as of yet.. The honey pod peas have a small infection of mildew but hopefully I can treat it as we haven't saved any seed from them for next year's crop yet.. I don't think the Roma tomato plants are looking that healthy at the moment either so they will also be removed to make way for some new crops.. I think the snake beans will be the first plants to go into that bed sometime this week..

Happy Harvests...
As I mentioned above, the snow peas, Roma tom's along with the broccoli will be coming out this weekend. These will be some of the final harvests from these plants..

There are still carrots being picked along with the shallot & onion scapes (flowers).. Can't believe I have never used the scapes in cooking before.. They are really tasty in stir fries as well as a sweet oniony snack while in the garden.. 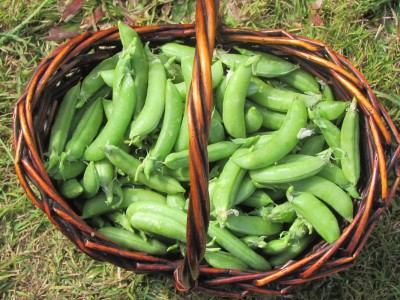 The honey pod & sugar snap peas are still producing but I fear they are near their end.. We can tell the plants are struggling as the new growth is slightly stunted in the warmer weather.. I will leave the honey pods in a bit longer so we can save some seeds for next year but Koo's sugar snaps will be pulled as she has more than enough seeds for a few more crops already saved..

Harvested the first of our pepinos this week & must say that we are all very happy that we decided to grow them.. 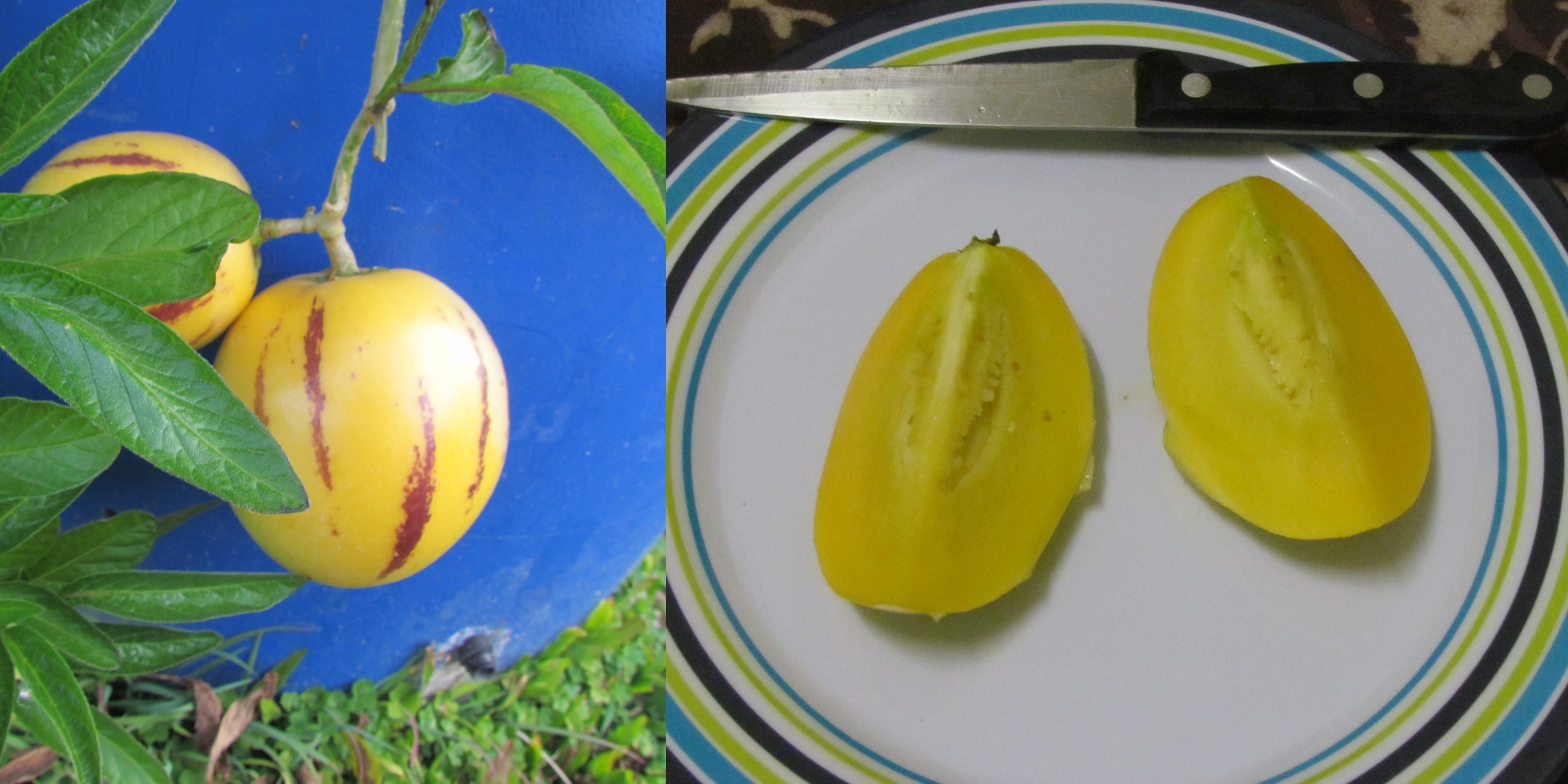 This variety taste like a rockmelon.. Not real sweet but the flavour is there which surprised us as some of the pepinos closest relatives are tomatoes & egg plants.. I shall be taking cuttings from the plant to propagate some more as well as looking for a different variety or 2 to try..

We missed the first head of purple cauliflower but managed to get the next one just in time.. 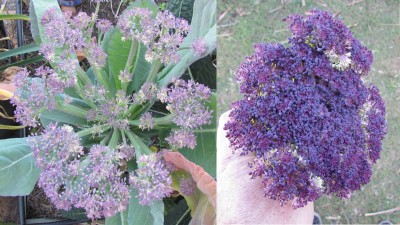 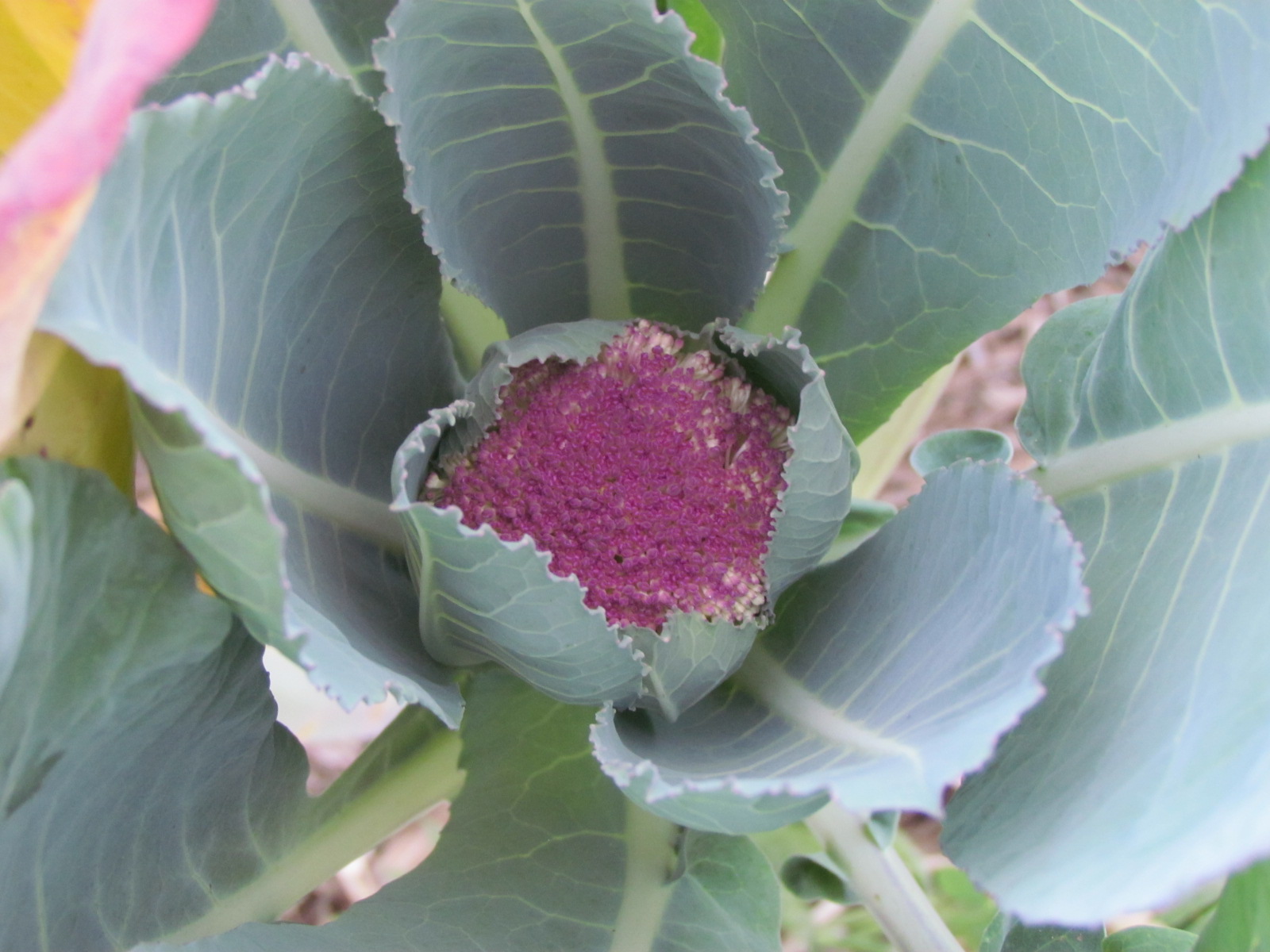 There are a few others that are just starting to flower so will keep a better eye on those fellers..

That's about it for this week..
Feel free to ask any questions, or leave any suggestions below..
If I don't know the answers I am only too happy to try & find it..
Hope you all have a great one..
:)»