No doubt all have seen or read about the effects of Mr Oswald as he devastated the East coast of Australia.. We got a tad wet here in Brisbane/Ipswich earlier this week with the Bremer river rising up to about 14m in town.. We escaped any flooding unlike a few areas west of Ipswich where it flooded as badly as 2011 but fortunately the loss of life is nowhere near that flood..

Sodden soil beds..
The garden here did manage to hold up fairly well considering it being swamped with 320mm+ of rain over 3 & a bit days.. All the wicking beds were so well watered with the rain that they were over flowing.. There were 2 of the newest IBC beds that had some drainage issues.. 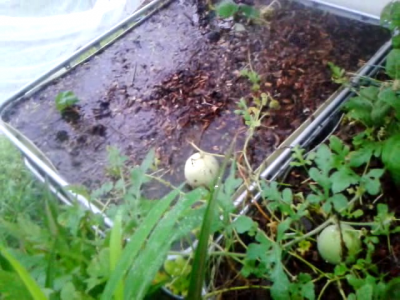 These 2 beds are in front of the aquaponics & collected so much rain they were still filled to the brim the day after the rain stopped.. 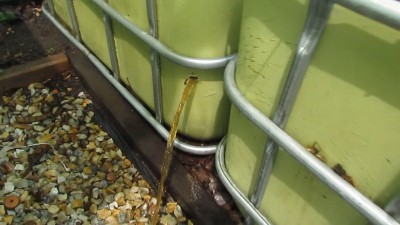 The fix for this was easy. All it involved was a 10mm drill bit which worked a treat.. 2 holes were drilled in the back of the beds & they drained in only a few minutes.. I was worried about the okra as the roots were submerged for so long that they may have drowned.. But they appear to have bounced back fine.. I think the poor drainage may have something to do with the makeup of the soil we purchased for them.. I won't go digging around trying to fix it now, as I don't think we will have another rain event like that this summer.. (fingers crossed)

Eventually the beds will be emptied out & moved to allow for the expansion of the aquaponic system before next summer, so any issues with the soil will be looked into then..

One concern that I do have is that, even though our beds are wicking beds with a reservoir in the base, we may have had a good deal of nutrients wash out of the soil as occurs after any large rain event.. I think the beds will need a good feed so during the week I mixed up some molasses & fish emulsion fertiliser concentrate.. The fish emulsion will help replace nutrients that have been washed away & the molasses will help feed the good bacteria & plants in the bed.. The concentrate was made up in a 2L juice bottle so I could get 8 equal 250ml doses out of it..
Sweet & sticky fishy fertiliser..
Empty 2L juice bottle
800ml molasses
320ml of fish emulsion (8 x 40ml)
880ml of fresh water
Place all ingredients into 2L & shake well..
Do not be tempted to have a wiff of the mix or your stomach may decide to rebel against you..

To make up add 250ml of the well shaken mix into a 9L watering can then fill with water..
This will feed about 3m² of garden bed..
I will be waiting until early next week to add this as the beds will need time to use up some water & also don't want to run the risk of it washing out if we do get more rain..

Flooded Fish…
The sump tank in the aquaponic system also overflowed due to the amount of rain that fell.. The goldfish were smart enough not to go investigate the water fall from the wrong side & all stayed put in the tank.. It was drained 3 times with about 500+L being removed from the system.. 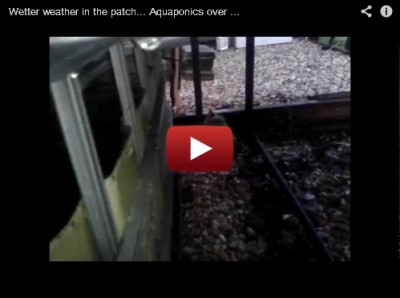 I did hope that this would help lower the excessively high nitrate levels in the system but unfortunately it doesn't appear to have worked.. I shall be removing some more water from the system this weekend & replacing it with 500L or so from the back up reserve tank.. Hopefully this should lower the nitrates further so the fish don't get poisoned.. Bianca is also off to get some more lettuce & Asian mixed greens seedlings to plant out in an attempt to use up more nutrients..
I did plant out some orach, perpetual spinach, white & Detroit beetroot seeds into the grow beds & have just started to see some shoots so am very happy with that : )»

Growing green feed for Poultry or Rabbits..
As our 2 chooks are fairly much confined in their pen & its yard we like to supplement their diet with greens that we grow as well as others we can gather.. At the moment they are feasting on silverbeet, mangle, lettuce, grass from the neighbour's yards & the clippings from the lawn when it is mowed.. While I want to give them better access to living fresh greens I am also painfully aware of the speed at which they can devour a 1 x 3 meter garden bed full of greens if the get into the veggie patch.. The easiest way to fix this was to finally build a living greens feeder Rosie Tea put me onto ages ago.. From memory she saw one in action at the Backyard Aquaponics shop in Perth..
The concept itself is a very basic one.. You sow some seed then cover it with a mesh, grate or grill (preferably scrounged ; )» ) so the chooks/poultry/rabbits cannot dig it up.. When the plants grows through the mesh the animals have access to fresh living food.. 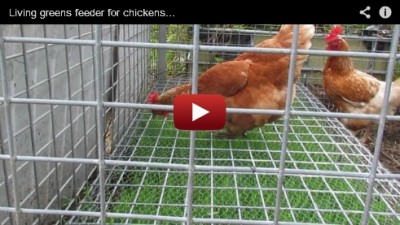 The beauty of this type of feeder is that once the greens are spent it can be opened up & the girls can then devour what is left, till & fertilise the soil ready for the next crop of greens.. I have no idea why I kept putting it off because it only took me about an hour to build & install the cage..

The weeks harvest…
Was a great week in the garden for chilli & mango harvesting this week, while dodging the rain.. 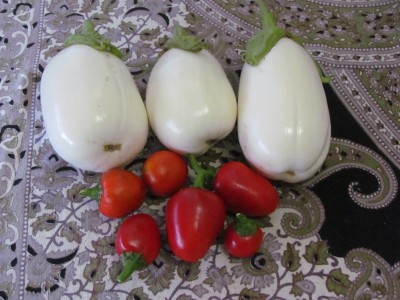 The white eggplants have been providing us with a few fruit every few days.. I prefer to pick these guys early so the flesh holds up better in stir fries & curries.. The chillies here are ball chillies & not the jalapenos that I thought they would be.. The seeds must have been mixed up during the drying process last year.. These seeds were saved from some store bought chillies & have a very hot bite to them.. 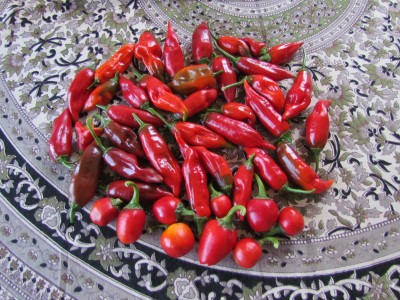 These chillies will be going into some Thai style curry paste I keep promising friends but have yet to make.. Will also need to harvest some fresh galangal to go into it but you will see that next week..

All but 3 or 4 mangos were harvest from the tree this week, only because I couldn't reach them.. 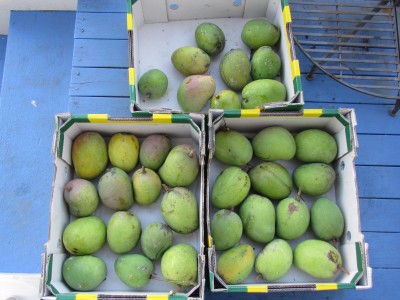 38 mangoes were picked, 2 given to the neighbours & the rest have been left in trays to ripen.. 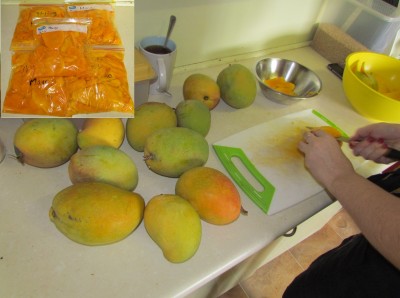 Last week's harvest ripened up nicely.. What was left after the "Mice" got to them was processed & placed into bags.. 2 were discarded as they were too "grubby" & 4 others had minor infestations.. These sections were cut around as I wanted to save as much scrummy mango as I could.. Just over 4kg has been frozen this time & I have a feeling most of it will end up as mango sorbet : )»

That's it for this week..
If anyone has any questions or any veggie garden topic they would like me to look into on a blog let me know below & I shall have a go at answering…
Hope all are safe & well after the past few weeks of floods & fires…
Have a good one & catch you all next week..
Rob…