Hi there all.. I hope you all managed to keep yourselves, family & animals cool this week..
I have read & spoke (on line) to a few people who have had some very high temperatures during the week & they have found the heat to be devastating to some of their crops not to mention some animals.. Please take it easy & don't try to do too much in the patch during periods of high heat.. Probably a good idea to try to get out there at night to give the patch a bit of a water if you can so the beds & plants have all night to soak up the water without it being evaporated by the heat of the sun.. It might be nice to put out a dish of water for the native birds & animals as well..
Stay cool peoples..

Molasses spray for plants..
I have known about this method of pest control for some time now but up until a few weeks ago have never tried it.. I became desperate after some plants in the aquaponics system were decimated by leaf eating pests.. 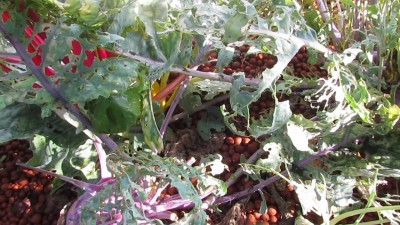 The main culprits were small grasshoppers, white cabbage butterfly caterpillars & cluster caterpillar moth (Spodoptera litura)**.. The cluster caterpilla infestation was far worse than any other we have had in the patch & the plants too far gone to be saved so I thought they would be great subjects for this trial..
With aquaponics you need to be really careful of what you use as pest control as fish are extremely sensitive to many chemicals so molasses fit the bill as a fish friendly treatment we can use in the grow beds.. I made up a fairly basic mix loosely following the instructions from Annette McFarlane's "Do it yourself" web page..
1 Tbsp of molasses was added into 1 litre of water then mixed well.. This was sprayed onto the kohlrabi & bok choi the following morning in the aquaponic grow beds.. Special attention was paid to spraying the centre of the plants where the new growth was forming as this is where the cluster caterpillar like to congregate & feast on the new growth..
By the following morning I found it harder to find the cluster caterpillars & the white cabbage caterpillars were gone except for 1 found crawling over the clay balls in the bed.. They were also no small grasshoppers to be seen on the bed so I think they moved onto greener pastures fairly quickly.. The spray was reapplied & within 4 days all that could be found were newly hatched caterpillars so I was sold on the effectiveness of molasses as a spray.. I decided late last week to move the trial onto the tomatillos that were starting to be attacked by the 12 spot ladybird & Colorado potato beetles.. I have sprayed these plants every second evening but did not observe as great a result as was seen with the caterpillars.. Late this week the amount of molasses in the mix was doubled in the hope that the increased concentration will help to control the beetles..
Another pest molasses is said to control are nematodes.. Colin Campbell recommended that they can be controlled by the following method,"Add half a litre of molasses to two litres of water and spread over one and a half square metres of affected garden area."***
My father has used this to great effect to remove a nematode infestation from a tomato box we made up together & unknowingly fill with contaminated soil.. I will be dosing up a few of our beds with the nematode mix to see if that improves plants health..
Molasses also has other beneficial uses in that patch.. It is full of minerals, vitamins & the sugars are a wonderful source of carbon to feed the microbes that in turn make nutrients more readily available to our plants.. A tablespoon or 2 in a watering can is all that is needed & can also be added at the same rate to liquid fertilisers like seaweed & fish emulsions.. It is also a recommend addition to compost piles.. The mix helps boost the microbial activity & will speed up the decomposition of the pile.. As to which type of molasses, sulphured or non sulphured, there are varying opinions from the sources I have read but it appears that the majority recommend non sulphured or "Black strap".. I definitely think molasses will be used a lot more in the patch from now on..
Well, That went on a lot longer than I thought : S»

Planting out & maintenance in the patch..

The majority of the Jarrahdale & baby bear pumpkin leaders were trimmed back as well as some powdery mildew effected zucchini leaves over the past few weeks.. They were add to the compost tumbler along with some screened horse manure & fouled straw bedding from the chook pen.. A whole zucchini plant as also added this week as the base of the stem had started to rot.. Hopefully we will have some lush rich compost made from all these goodies in about 2 months.. I think the jarrahdale liked the pruning as 3 more pumpkins have "set" since the haircut : )» 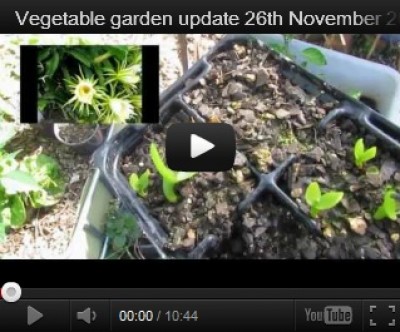 I managed to do a bit of a walk around clip earlier in the week for those that feel like a wander through the patch..
Not much to mention here planting wise except for 7 small rows of heirloom mixed colour carrots, a round zucchini seedling to replace a gold rush plant that was removed & an angle lufa seedling that was transplanted from the community gardens.. It was recommended to me that the juvenile fruit of the lufa vine make a great substitution for zucchini so is a fruit I am eager to try..
Probably a good time for all us a veggie gardeners to check with Gardenate.com to see what seeds are ready to sow into pots or the patch for Summer... Just need to choose your climatic zone here http://www.gardenate.com/zones/ , click on the "Planting now" tab & away you go..

A few tasty harvests from the patch..
We have decided to hook right into the beetroot this week & prepare them into salads.. 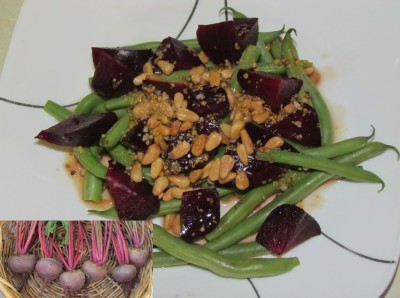 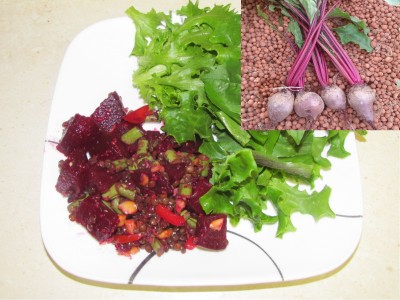 The second was a lentil & beetroot salad with the leftover dressing from above... Both were very tasty but I think I preferred B's bean & beetroot creation best : )»

Have also been making up more of the veggie stir fries this week with pickings from the patch.. 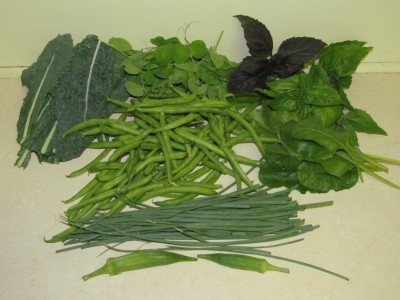 They are just so quick & easy.. I think they are great all by themselves with a few cashew nuts thrown in with a drizzle of sesame oil or topped with some pan fried chicken..
Last night saw us celebrate the first day of summer with the harvest & devouring of the first cucumber from the patch this season.. 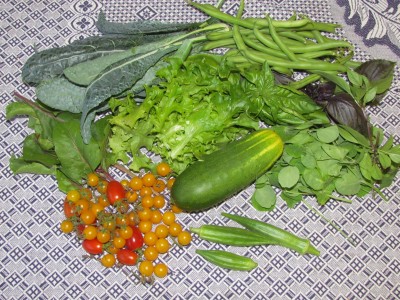 It was a basic chopped salad with some red wine vinegar dressing served with some chook fillets.. I think we will be enjoying salads all week if the bureau of meteorology are on the ball with their predictions this week..

** A big thanks to Jerry Coleby-Williams's face book page for helping with the identification..
http://www.facebook.com/pages/Jerry-Coleby-Williams/238444853764