Fixing Hydrophobic soils...
This week has been a bit of a busy week in the garden.. Managed to start a few projects that I have been putting off, as well as finish a few others… It has also been time to do some general maintenance to get a few beds ready for some new crops..

2 of the tin wicking beds down the back of the patch were given a bit of a clean out during the week.. The beans & zucchini were removed from the smaller bed leaving 4 golden purslane plants.. Went ahead & topped this bed with some freshly harvested worm castings, aged & slightly composted horse manure then topped off with some sugarcane mulch.. All was going fine until I noticed water running onto my foot while watering the bed.. After parting the freshly added top layers I discovered that the soil was not allowing the water to penetrate at all.. I dug a few small holes & filled them with water & watched as the water just sat there not absorbing into the bed at all.. After removing some of the mulch & digging deeper I discovered that the top 150-200mm of soil was very dry & indeed hydrophobic..

I think this has happened because I tend to water at the base of the plants with the hose, so only the roots are getting the water & not the whole bed in general..

When soil is left dry for extended periods it can tend to become hydrophobic & not allow water to penetrate to deeper levels.. Being a wicking bed the plants always had access to water in the root zone, so they didn't really offer any insight as to what was going on in the top 100mm or so of the soil.. Normally when this happens in a normal garden bed the plants will let you know by a loss of vigour & in most cases death through lack of hydration… This is quite often seen in pots where commercial potting mixes are used.. Once the pot dries out for a short period of time, the mix can become very water resistant & require saturation for the mix to dehydrate & allow water to penetrate.. Sitting a pot in a bucket of water until it is saturated is probably the best way to resolve this issue.. Adding some mulch to the top of the pot will also help keep the surface of the mix damp after watering.. Commercial wetting agents can be purchased, with some organic certified ones also being available..

For me the best way to fix this is to add some organic matter like compost or horse manure to the soil.. This will feed the micro-organisms which in turn will help enrich the soil & make it hold moisture better..

The fix for me was a rather messy one due to the rain.. :D» I removed as much castings, manure & mulch as I could from the top of the bed then dug a bag of horse manure through the soil.. The worms that were added to the bed (the castings were full of them as well as cocoons) will also happily feed on the manure & mulch making more castings which will also help the water holding capacity of the soil.. 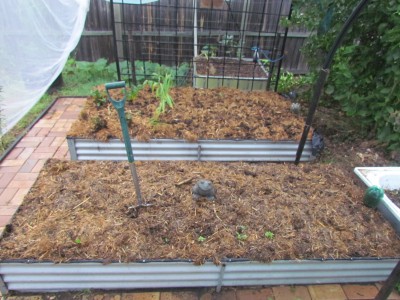 The larger trellised bed was nowhere near as painful thankfully.. The mini Romas, spaghetti squash & a few basils were taken out & the bed was left with some rainbow silverbeet, mangles & a small stand of ginger.. This was one of the first beds that had the home made timber mulch added to it & I was very pleased to see that it has been decomposing very well.. While checking the soil I did notice a few spots, where there were no plants, were slightly hydrophobic.. This was quickly fixed by clearing the mulch & scratching through some manure into the top layer of soil.. A mix of castings (containing worms & cocoons), screened horse manure & cane mulch were added to the top of the bed then a black Russian tomato was planted against the trellis..
I am fairly happy that these beds should do fine now especially after extra worms & organic matter have been added.. Now I just need to sort out which winter crop plants we would like to add & sow them out over the weekend..

Propagating strawberries the easy way…
Over the past month or so the strawberries have been winding up their fruit production & started to send out copious amounts of runners.. I think runners are the best way to propagate strawberries.. I have tried with seeds but have never had any success.. When you can get up to 4 "nodes" (growing points) on one runner it is very easy to end up being overrun with new plants.. A few friends were after some so I took the chance to film the process to show how easy it is to start off new plants.. 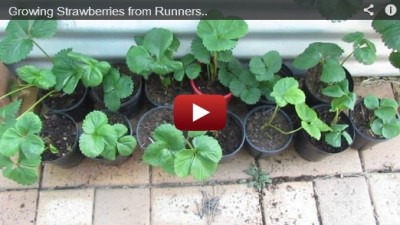 As soon as the weather clears a bit I will be potting up some more runners… Can't bare to see them go to waste..

Chilli paste…
We have been picking a few chillies every few days so far this summer.. I have been collecting them in a container in the fridge to make up different Asian flavoured paste.. One thing we do use a bit here & there to spice up different meals is a plain chilli paste.. So I decided to make up a jar that we can keep in the fridge for an extended period of time.. I decided to use vodka to keep the nasties out of the paste as we have done this before with galangal & ginger we harvested from the patch.. 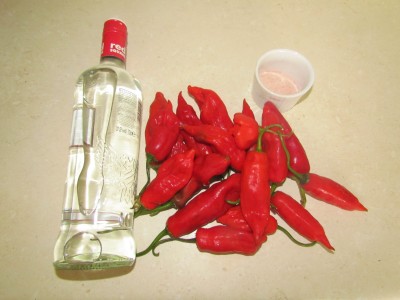 It is a really easy recipe that only uses 3 ingredients, chillies, vodka & salt..
I must also thank Granny Mel from "Share the Seed" for helping me out with a few pointers..
250g Chillies, chopped in ½
½ cup Vodka
½Tbsp salt
2Tbsp water
1 sterilised jar & lid

Put chillies in food processor & whizz on high for 30 seconds or until chillies are finely chopped.
Add the chillies, water & salt to saucepan & bring to the boil, then reduce to a simmer for 4-5 minutes.
Turn off & allow to cool for 5 minutes before stirring through the Vodka.
Pour into sterilised jar & seal.
I have been told vodka based preserves will store OK on the shelf but think I feel safer storing it in the fridge once opened. 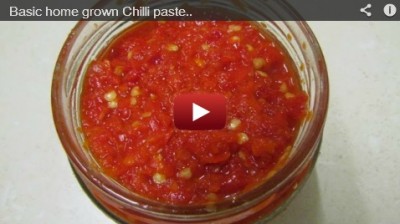 Harvested a load of bulls horn capsicums this week… 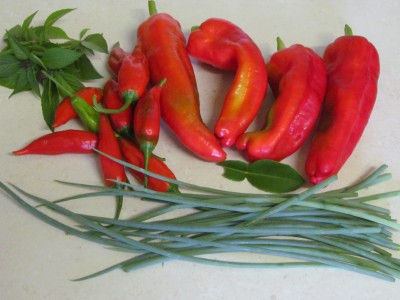 There are still a few on the bush so I hope we get more in the coming week.. The basil, kaffir leaf, some chillies & shallot greens went into a very tasty Thai soup.. 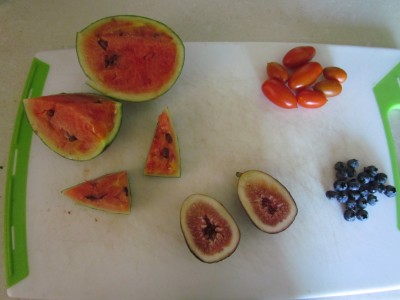 Our eldest daughter went around the yard to harvest the berries & our second fig for afternoon tea on Wednesday & it was very tasty indeed.. The mini "seedless" watermelon (top Left) is the only hybrid seed that was planted this year & don't think we will be bothering to try them again somehow..

On Thursday we planned to have a curry so I "Bandicooted" out a few sweet potatoes from the lime tree bed.. 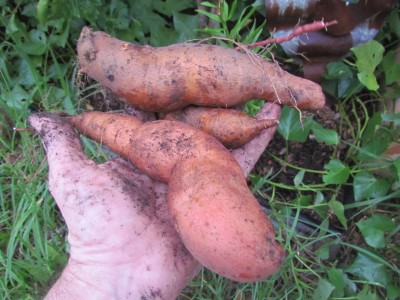 Dinner plans for the night were cancelled so I have kept them to one side for a chicken pie our youngest wants to cook tomorrow night..

I posted last week on the mangoes that were picked green to ripen in a box & I must say it was a HUGE success : )» 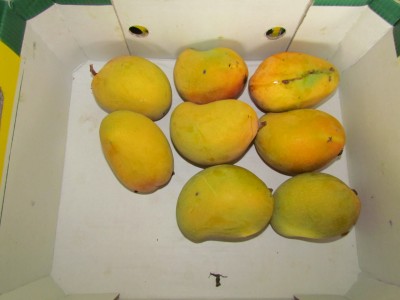 2 were eaten during the week with 4 being eaten today :D»

I was so pleased with what I saw during the week that I went & picked another 20, 2 of which were already ripe & were devoured that afternoon.. 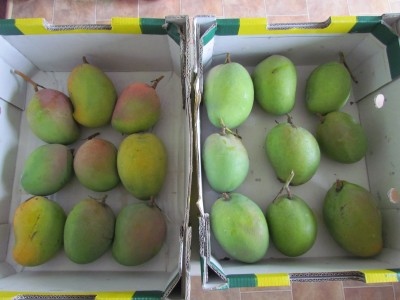 The rest were put into some trays we picked up from the green grocers so they can ripen over the week.. I think there are at least another 20 or so that I will try to pick before the bats get to them..

That's about it for now but before I finish up I would just like to wish everyone caught in the crazy weather extremes around Australia all the best.. You have been in our thoughts & hope you all pull through unscathed..
See you next week…
: )»