BOGI fair...
Last weekend we were able to make it to the Brisbane Organic Growers (BOGI) fair.. Unfortunately we missed a few of the talks that were on offer but did get to visit their seed stall as well as a nursery stall… The seeds were all $1 each so I splurged & grabbed 10 packets.. A few are varieties other customers at the stall recommended we try..
Watermelon, "Mini Lee" & "Yellow Shipper"
Celery "Tall Utah"
Kohlrabi "Purple Vienna"
Beetroot, "bulls blood" & "Detroit"
Carrot "Dragon"
Passionfruit "Giant Granadilla"
Bok Choi
Mustard Greens "Osaka Purple"
Some of these will be sown out today or tomorrow.. The passionfruit is one I am really wanting to taste..
Also visited a nursery stall & picked up a few plants we have been wanting for a while.. 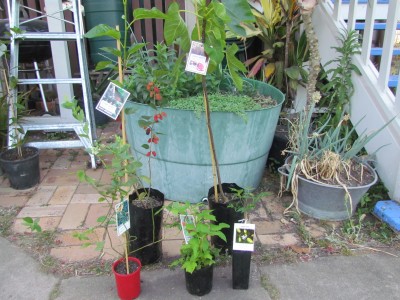 We decided to get a dwarf black mulberry (grows to 2.5M) to replace the poor tree we have in a pot… We have already found a good home for the potted tree with a couple we met at an organic buying group.. They just bought locally & are wanting to have some productive trees & plants growing by the time they are ready to move in.. We are very glad it is going to a good home..
The other plants we purchased were a "Biloxi" blueberry, a dwarf " Black Genoa" fig (grows to 2.5M), a Autumn fruiting heritage raspberry (to replace ours that just doesn't appear to be growing that well) & a very small Neem tree.. I have wanted to get our own neem tree for over 14 years now & am most pleased that we did.. They are supposed to grow to 6M+ but we shall be pruning it to keep it under 4 & including the branches in any mulch that we make to help keep bugs away from the garden beds..
Now that we have the trees we shall be working on the new layout for the front yard as we intend to turn it into a more productive part of the yard.. There were also coconut trees for sale & I was very tempted.. 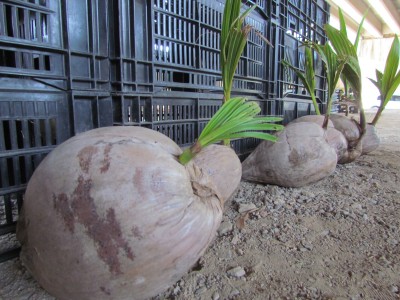 Think I will hold out for some property for those guys as they can grow rather large..

Powering up the fish..
The final touches (or at least I hope they will be for a while) to the Aquaponic setup shall be completed very soon with power being brought down to the site.. I have been assured by the electrician that if I dig it, he will come... I started to dig a trench on Monday & the going has been a bit tough as the trench needs to be 60cm in depth… The top 20- 30cm was fairly easy to dig through.. It is a bend of gravel & soil but the bottom 30-40cm is a solid red clay with white marbling which was painful to say the least.. 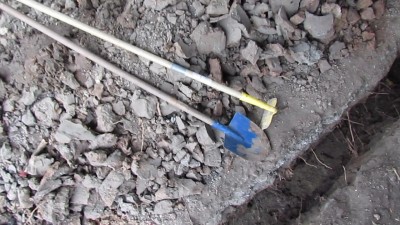 The going was very hard the first day with only primitive tools being used..
Only joking, a mattock & trench shovel were my main weapons of choice with a crowbar being used to break through some old brick foundations.. On day 2 our friendly plumber turned up to do some work on the hot water service & he took pity on me after he saw what I was digging through.. He offered me the use of his Kango jackhammer for a few days & left with a huge grin saying "better you than me".. I was most grateful for this & powered through 5 meters of trench in a few short hours.. Thanks Dean.. Unfortunately that afternoon I sliced my finger open on some glass that was in the soil, so had to down tools & get some medical attention much to my displeasure as the electrician was coming in the morning to wire in the hot water service.. I missed the chance for him to wire up the cabinet for the Aquaponics but he assured me he would make a speedy return once the trench was finished.. I also intend to include a water line in the trench so we no longer have to drag the hose down from the house to water the patch.. Hopefully this trench is worth all the pain.. (I am aching all over like I haven't ached in over a decade, must be getting old..)
This week is Aquaponic Update week for You Tube so feel free to have a look how the fish & plants are going.. 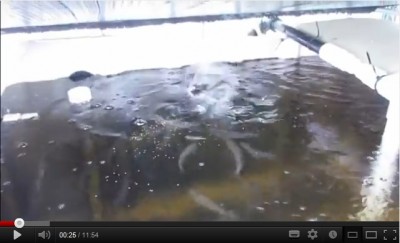 Planting out & growth in the patch..
Planted out a few of the bulls horn & mixed capsicums into the insect house today.. 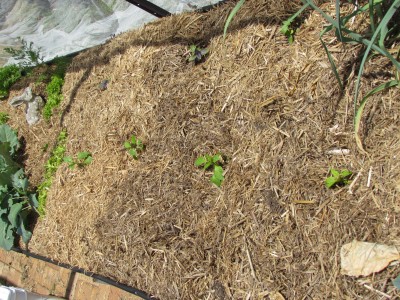 Some fruit fly traps will be made & installed in there just in case any manage to make it in… They are a fairly easy build & will hopefully do their job well.. I would like to end up with a surplus & be able to offer them to a local buying group for some extra income but shall see how we go.. Some bush beans (to replace some that didn't shoot), nasturtiums & lettuce purchased at a Friday night market were also planted out this morning..
Have been most impressed with a lot of the growth in the patch over the past week… 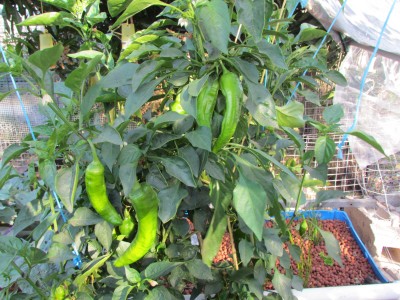 The Bulls horn capsicums have been booming along with about a dozen fruit on it of various sizes + at least another 15-20 flowers coming on.. I think these plants will be a big bonus to our garden.. 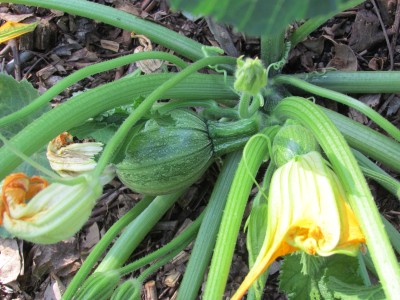 We have a couple of Kakai pumpkins forming on the bushes.. These guys have hulless seeds so make a great pumpkin to grow if your into eating pepitas.. They appear to be doing better than last year's "Pepita" pumpkins, so I think we might be on a good thing with these Kakais.. 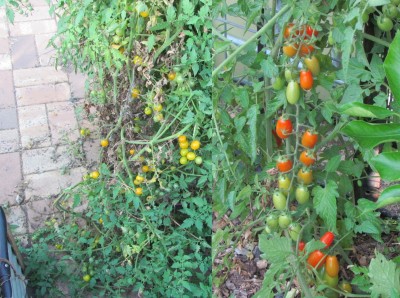 The feral broad ripple yellow current & mini romas have been booming along as well.. I usually find these volunteer plants nearly always outperform the intentionally propagated ones.. 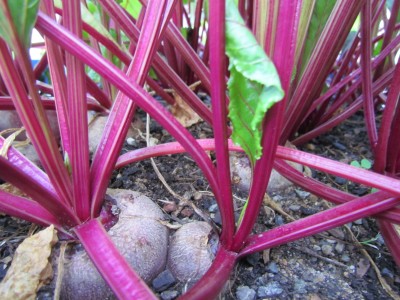 Some of the beetroot in the barrel shall be ready to harvest before their predecessors in Bed #3.. Also think a new sowing shall be planted out over the weekend along with some of the other seeds purchased at the fair..

Flowering Pineapples...
Also have a short video update on the pineapples that are fruiting & now flowering.. 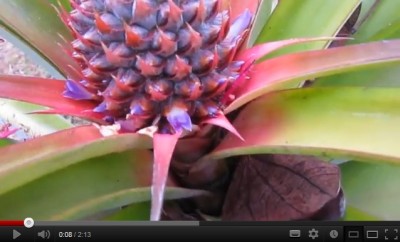 Seed Freedom..
This fortnight (2nd October, Gandhi's Birthday, to 16th October, World Food Day) is also a celebration of "Seed Freedom".. If you eat food this involves you & your health..
5 Corporations now control 75% of the seeds that are sold on this planet... Seeds are a natural everyday occurrence yet moves have & are being made to patent/register these embryos of life so that only corporations can trade in them.. This will reduce the quality & varieties that we will be allowed to grow & eat.. This has & will continue to affect the already dwindling gene pool of vegetable & fruit plants available to farmers as well as backyard gardeners all around the globe..

While I support small heirloom companies like Eden seeds, Diggers, Green harvest & the many other small seed selling operators, sharing seed is the one true way to keep it free & available for every human on this planet..
The easiest way to make a difference is to grow your own food even if it is a pot of herbs by the back door or planting the normally discarded base of a shallot into a pot or garden & is also very "SS".. If you don't have space to grow food look for a local community garden to join or support local growers by joining a buyers group or shopping at local fruit & veg markets.. You can also collect seeds from plants you have grown & share them with your neighbours, friends, family & anyone who wants some.. Sharing any excess seedlings you have is also another great idea & makes an excellent gift that always pleases us gardeners : )»
http://seedfreedom.in/learn/what-is-seed-freedom/
http://www.youtube.com/watch?v=naVPxPqAbgU

Weekly Harvest…
This week's harvest has mainly been the leafy greens like Lettuce, kale, mangle & silverbeet/chard..
Last night Koo & I went around & picked a heap of tomatoes & other veggies for some Friday night chook rollups.. 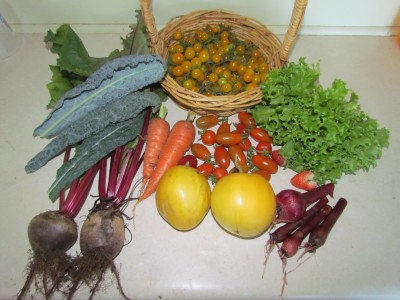 The beetroot, yellow toms, red spring onions & carrot will be added to a chook & quinoa salad tonight.. The pepinos will make a great dessert I think..