Update on the aphids...
Well, that didn't go as planned.. The chilli & soap sprays were used on both infestations over a few days & to be totally honest, I think the aphids in Bed #1 lapped it up & multiplied looking at these shots from last Sunday.. 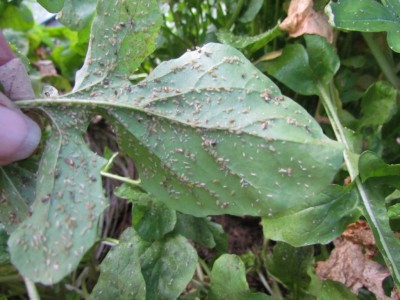 The soap spray in the aquaponic bed didn't really appear to be doing much either & the trial was cut short as I wanted to thin out all the plants from there into other beds.. All the aphids got squished as I didn't want to spread the aphid infestation around the garden.. Some, no doubt were left in there but were hard to see in the clay pebbles.. As the sprays were not appearing to work after 3 days of treatment I decided to combine the soap & chilli/garlic sprays then continued to use it on the salad greens infestation… After another 3 days I got a pleasant surprise with a reduction in the numbers but not as great as I thought.. 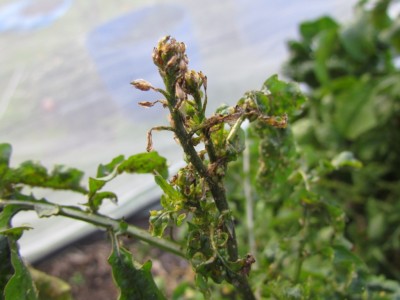 They were sprayed another 2 times after that but it didn't knock them all on the head.. I have now stopped spraying these guys as I think the plants are getting a tad past it anyway & would be better used giving the chooks & worms a treat.. I think the next batch I make up will have a slightly different formula with maybe more chilli & garlic as well as the liquid soap added to boost the potency..

The aphids in the aquaponic grow beds regrouped after I thinned out the plants & launched a full scale attack on the chives.. 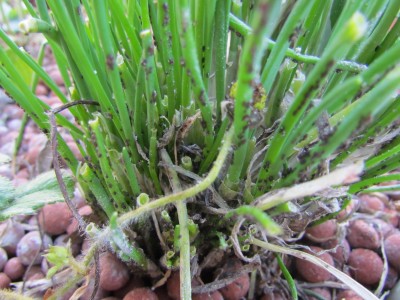 This was good as I got to try out a new delivery system for the Diatomaceous earth.. We bought an infants aspirator used for clearing out blocked nasal passages, filled it with some DE & put it to work Thursday morning.. It worked out to be a great way to target the little blighter's.. 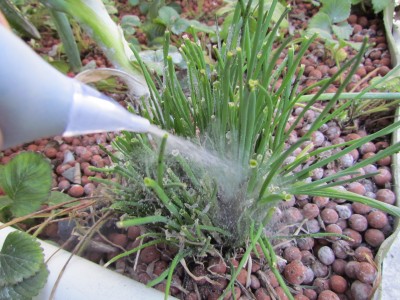 On Saturday morning we had another look & there appears to be only about ½ the numbers that were there on Thursday, so I think it is working well.. It is definitely a better way of applying the DE than just shaking some on from a small container & hoping for the best..

Switching Off for August..
One of the things I love about the end of the day is getting out into the patch & switching off from our everyday routine.. On the weekends it is even better when the whole family get out there to work or play without any of the electronic distractions that we sometimes tend to get caught up in.. A favourite pastime on winter weekend nights is spending it with friends around a fire in the yard.. It's nothing special, just a small brazier with some dried up bits of pruned timber or split logs donated by family & friends.. 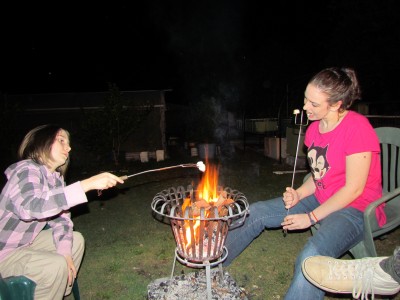 It is very easy to entice the gathered children away from their gadgets & the TV with a promises of sparklers & a marshmallow or 2 on a stick to roast in the fire.. It is so easy to switch off when gazing into the flames with great company & the garden as a backdrop.. Hours are normally spent talking, feasting & having a great time but it never seems to last long enough..
Another switching off we try to do as often as we can is the garden tap.. Although we have not installed water tanks as of yet we try to collect as much fresh rain water as possible.. We have many 15L buckets, & a small 500L rain water tank that we fill with water collected from a tarpaulin shade cover off the back of the house.. This is mainly used in the aquaponics as top up water or to fill up the wicking barrels.. I know it is not much in the scheme of things but every little bit counts..

Planting out..
After picking all the small broccoli heads, I finally got around to clearing out the plants that weren't growing too well in Bed #1.. Nothing goes to waste with most of the pulled plants going to the chooks & some leaves to the worm bins.. The broccoli & cauliflower area of the bed got a good feeding with some CBM (Chicken Manure, Blood & Bone and rock dust minerals) then were replanted out with some broccoli & cauli seedlings that we purchased last week... 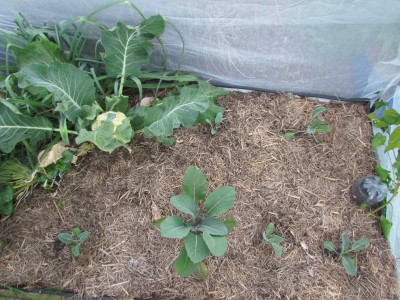 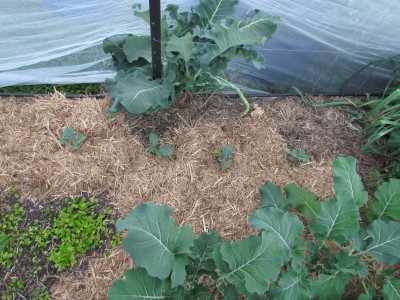 4 Broccoli...
Some purple broccoli seedlings (seeds via Share the Seed group) were planted out into an AP grow bed..
Most of the green onions that were in the Aquaponic system were trimmed & planted into the end of Bed #1. This freed up some much needed space in the grow beds, with the remaining HUGE onions getting trimmed & moved into an adjacent bed to be consumed as we need them over the next few week... 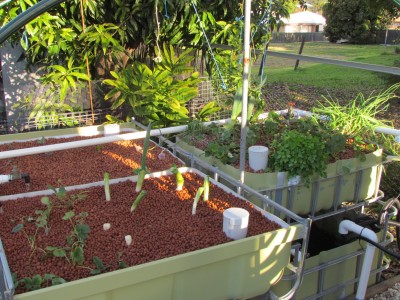 A whole heap of strawberries were also thinned out & moved into one of the new grow beds.. From the 5 or so that went in to begin with, there is now over 25 plants + the 3 runners that were planted out into pots.. Some mini beetroot seeds were also sprinkled in front of the trimmed green onions just to see how they will go in the AP set up.. There is also a small self sown dill or carrot seedling that was found in another bed that got planted into a grow bed just to see what happens.. Think it might be too wet for carrots but you never know..
Also decided try planting some broad ripple cherry tomatoes by squeezing the seeds from some over ripe fruit into some soil mix just to see how they go.. They went in last Sunday but haven't seen any signs of sprouts as yet..
Some native raspberries were found to have sprouted from some discarded root sections in the saved soil from their old barrel.. 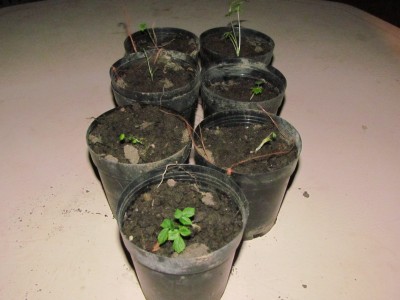 Managed to save 8 small shoots, 7 of which were planted out into small pots & a larger shoot went into the new raspberry barrel with the rest.. We have more than enough for us, so will be gifting these little plants me think..
As I mentioned before, the rest of the mescal salad mix will be pulled & fed to the chooks & the worms. So with them gone, some purple broccoli & cauli's can go in there to keep them away from the white cabbage butterfly.. There will be some aphids left over but I'll spray them with neem to knock them off once & for all.. 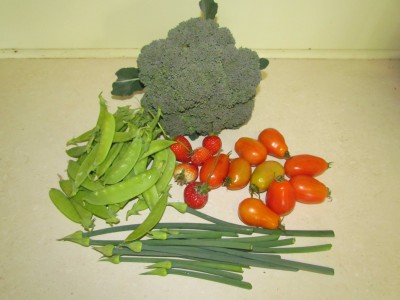 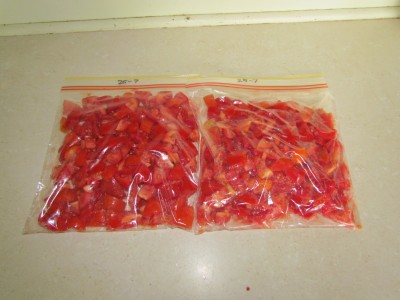 Down to 1 head left of broccoli in the bed but have HEAPS of side shoots coming on, so they will keep us going for a while.. The honey pod & sugar snap peas are starting to produce enough for a meal every couple of days.. The snow peas are still pumping out lots of pods daily. I have left HEAPS of pods on the plants so we can have seeds to share next season.. I think the plants will wind down soon, so I'm getting another bed or 2 ready to sow out.. Also collected some scapes from the red shallots to go into a stir fry & about a Kg of tomatoes, which we diced & then froze.. I'm waiting to collect about another 2 kg so I can have a go at making some tomato paste..