School holidays are here, it's pouring with rain and there are six hulking great teenage boys in the house trying to shoot each other on Playstation. It's only 11am and they have already consumed a jumbo bag of cornflakes and half an enormous fish pie leftover from last night. I have a feeling Noel was looking forward to that for his lunch so he's going to get a fright when he gets home! Still, at least they're out of bed earlier than yesterday, when they didn't get around to having breakfast until 1pm and lunch at around 4pm. Mind you, they were up until 3am the night before so it's hardly surprising!

Yes, the teenage years have hit big time and I have to admit so far we love it. They may be impossibly vague and it is rather tiring having to repeat everything you say twice (because the only response you get the first time round is 'uh?') but at the moment they are still nice and so are their friends. When we first moved in Noel thought I was crazy for declaring the whole of upstairs the boys' domain but now even he has to admit it was a stroke of genius. They're not under our feet, we can sleep peacefully through their laughing and yahoo-ing and best of all, we don't have to see the mess they make or worry about cleaning it up! It's a perfect arrangement - if only I can train their mates to put the toilet seat down! 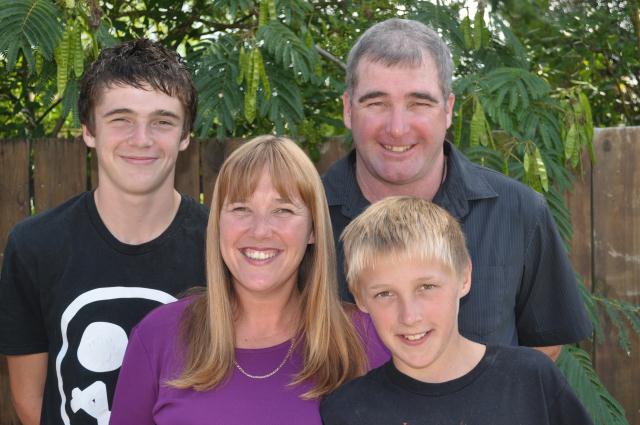 This picture of the family was taken a month ago. Since then Liam (left) has grown so much that Noel now has to look up at him! I just took this pic ten minutes ago and look at the difference! Is it any wonder our food bill is so high? I wish I could say he was standing on tiptoe but he's not! 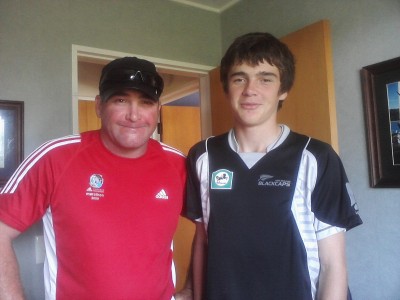 Things have sure changed in the last six months and this has never been more apparent than at the weekend when we tried to spend a 'family day' together. Since moving to the beach we all enjoy more activity and leisure time than ever before but now the boys are older and so much more independent, we rarely do things all together. But Noel and I decided it was high time we all spent a fun day just the four of us. The plan was to go to Hamilton and do some shopping, then go tenpin bowling. Should have been great! Unfortunately nothing really went as planned. Liam had a couple of friends staying over and was up until 2am the night before and Ali wasn't much better, having been on a school trip and didn't return until 12.30am. All four of us needed a rocket to get out of bed and by the time we set off it was already lunchtime and we still had a long and boring drive ahead of us.

Almost two hours later we arrived at The Base; NZ's largest shopping centre. We couldn't remember the last time we all went shopping together and as soon as we got out of the car we noticed the first difference - Liam insisted on dragging himself along a good 10 feet behind us, rather than walk with his parents and little brother. Fortunately he didn't have to keep this up for long, as we hadn't even set foot in the first shop before he ran into a group of his old schoolfriends from Te Kauwhata. Needless to say we didn't see him for the rest of the afternoon!

'So what are we shopping for?' I asked Noel. 'I need new clothes, everything's worn out!' came the reply. 'I need t-shirts, jeans, undies, jumpers - everything really'. He was in the mood to shop big - but not in the mood to spend big and as the hours went by he became increasingly grumpy and frustrated with the price of things; or with items not showing their prices at all. 'Why don't any of these jeans have the prices on them?' he growled. 'I hate having to ask for the prices of things! If something doesn't have a price tag on it, it always means they're too bloody expensive!' Apart from a bargain pair of Levi's and a t-shirt, Noel flatly refused to pay the store prices on pretty much everything. Even the undies were overpriced as far as he was concerned!

As for Ali and me, we were too scared to look at anything let alone buy it, after being told from the outset that this was the only outing we were going to get all holidays ('but the holidays haven't even STARTED yet!' protested the boys) and we weren't going to be allowed to buy a single thing after today. In the end I decided it was probably best not to buy anything at all and we returned home hours later worn out, grumpy and tenpin bowling-less. 'I'm never going back there again!' Noel declared. So much for our fun day out!

'I'm sorry', Noel apologised later. 'I shouldn't have gone on about not spending as soon as we got there - but the cost of living has me really worried at the moment. Our food bill is crazy and it's getting worse! Everywhere you look the price of things is going up. It's just really getting to me, that's all'. I can't say I blame him. I would honestly estimate that our food bill has tripled in the last six months. Just like Alan Beagle said this morning on Coromandel FM, 'When the price of BMW's or TV's goes up by 5%, people don't buy them. But when the price of petrol or milk goes up, what do you do?' For once I don't know but it's something that we need to put a good deal of thought and effort into over the next week or two. One thing's for sure, we will find a way to stay afloat!