It definitely pays to live in the middle of nowhere! I can hardly believe it but I've made it to Christmas without experiencing an ounce of stress! No crowded shopping malls, no impulse buys, no standing fuming in queues or swearing under my breath at other fraught shoppers as we bash baskets and trolleys into each other. Almost every purchase has been carefully thought out from the comfort of my own home and personally delivered there too! Even the items I put on lay-by months before we moved were picked up without having to travel to the city. I just rang the stores, explained I had moved and asked if I could complete my order over the phone using my Visa Debit card. They happily agreed to post them out for a fraction of the price it would have taken for me to drive two hours to pick them up!

Speaking of which, I haven't put any petrol in my car for longer than I can remember! I'm not sure when I will get around to filling it up either, thanks to the fantastic birthday present I received from Noel and the boys. Check this out, is this the coolest bike in the world or what! 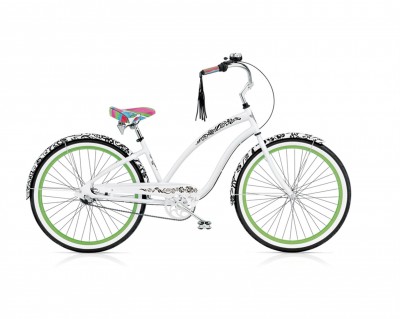 It's so sturdy I should never need to buy another one and will pay for itself in no time with the amount it will save me on petrol. I absolutely adore my bike! And, with its flowery design I don't have to worry about the boys pinching it either! So if you ever happen to be in Whangamata and see someone whizzing past, ringing a 'ding-dong' bell like an Avon lady, it will be me!

Obviously I can't reveal what Noel and the boys are getting for Christmas but one thing's for sure; they won't be sitting inside this summer. If Liam thinks he's getting a new swag of Playstation games he is sorely mistaken! We made an early start to No Screens Month by putting his Playstation away under lock and key. From now on he is only allowed to play it on rainy days when there is not much outside he can do. When we first moved here Noel and I were delighted to see that he was so busy having fun in the great outdoors that he didn't even turn his Playstation on for the first few weeks. However once the boys made new friends and they all started hanging out at our place, things changed. The Playstation would go on and they would waste away day after scorching hot day holed up in Liam's room trying to beat each other at being soldiers, zombies and goodness knows what else.

The thing I hate about Liam using his Playstation for long periods of time is that you can actually see the changes in him. He loses all motivation and you can actually see him withdraw into himself as he becomes lost in his own little world where nothing else matters except scoring a century or beating the bad guy. Conversation gets replaced by grunts and he just about needs a rocket under his backside to get him to actually do anything. The only way to get my big, beautiful boy back was to take the blasted thing off him.

When he first realised his beloved games were no longer accessible 24/7 he was far from impressed. He saw it as punishment - I saw it as helping him. 'I want a son, not a cabbage!' I pleaded. 'There's a big world out there - we live at the BEACH for goodness sake! Go and find something else to do!' And he did. And when his friends came round and discovered the Playstation was out of bounds, they all found something else to do too. The backyard cricket came back, the tent went up in the garden, they started going to the pool and the beach again and their laughter could be heard late into the night as they raced around the neighbourhood playing Spotlight, which is basically a game of hide and seek in the dark. The different was marked and no one was happier than Ali, who had also had enough of having a cabbage for a brother and a bunch of couch potatoes as friends.

Ali loathes video games. As far as he's concerned, they actually STOP people having fun when they could be doing much cooler stuff outside. Like catching fish on a hand line from the wharf or exploring the big hill at the end of the road. Or earning money. Back where we used to live, jobs for kids their age were hard to come by but when we moved here the boys saw that many of their friends had jobs. As soon as Ali spotted an ad for newspaper delivery contracts in his school newsletter, he picked up the phone. Five minutes later he proudly told me 'I've got a job! I have to deliver 135 newspapers twice a week'. Next thing we know Liam is also dialling the number and securing a job for himself too! The money isn't huge but as Ali says, at least they're not stuck inside. They get to ride their bikes around the neighbourhood and once all their papers are delivered, the rest of the day is theirs. The first day they got to grips with their delivery route, they were touched at the number of elderly people who came out to thank them and help them by telling them who lives where, which houses were empty and so on. 'It's fun!' said Liam. 'Yeah - better than playing Playstation', Ali said pointedly at his brother. 'And you don't get paid for doing that!'

I don't believe in forcing a kid to do anything they don't want to do but there is one thing that we have really pushed the boys to do and that is surf life saving. Not that Ali needed any pushing. From the outset he loved heading out to the waves on his kneeboard, getting bowled around in the surf on giant tubes and working as a team in the rescue boat. Liam however needed a LOT of pushing. Even bribing didn't work! The reason? None of his mates at school did it. They all preferred hanging around town or playing video games. He didn't want them to tease him for being the only one who did it. That, coupled with an acute case of shyness. I thought we were fighting a losing battle until we went to his school prize giving, where the speaker was an inspirational young woman who had spent the last six years working for Surf Rescue. She spoke of how she was the only one in her year who did surf lifesaving when she was at school but she didn't care because the moment she joined up, she became part of a family. She told the kids not to be sheep and follow the rest of the crowd but to do what they wanted to do. To take every opportunity that was offered to them. All the things Noel and I had been trying to tell Liam for weeks - honestly, she couldn't have said it any better if we had been paying her to say it! Although I think it helped immensely that the girl who was speaking now was absolutely gorgeous and not fuddy duddy old Mum and Dad!

So that weekend the boys went along for the first time and received a warm welcome. 'You can't be shy around here!' they told Liam with a grin. Ali loved it instantly and whilst Liam was more reserved to start with, he's learning it's much more important to be happy than be cool. The stunning girl who spoke at prize giving is now their instructor and from Boxing Day they will be spending every day of the summer holidays at the beach training to be lifeguards. They'll be getting fit, healthy and sea savvy and learning vital First Aid skills. What with that and their newspaper round, I reckon Liam will be so busy having fun, he won't even miss his boring old Playstation!