Well, the boys have gone back to school today after two weeks of holidays. Out of the entire fortnight we had one, yes ONE fine day where it didn't rain - and that was yesterday! Even with the rubbish weather we decided to pootle off to the beach for a few days. We figured that even if it wasn't exactly beach weather it would just be nice to get away and have a change of scenery. The first day started off well enough. Noel and the boys went fishing and were having a fabulous time catching some big fish - until news broke of a tsunami warning and they had no choice but to come in. The rest of the afternoon was spent with one ear listening to the radio while the warnings were cancelled, then un-cancelled and with the other ear listening out for sirens in case we needed to evacuate and head for the hills. Still, on the positive side the guys had been able to bring home plenty of fish for dinner, as Alex and Ali show here, proudly displaying their biggest catches of the day (not to mention Alex's broken arm!) Please excuse my son's facial expression! 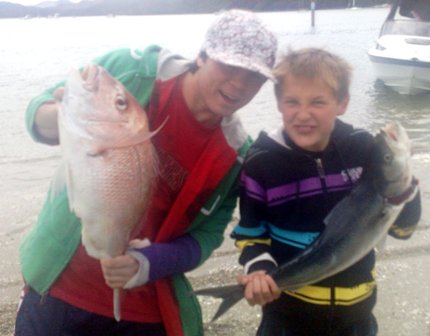 Here followed two days of rain, rain and more rain. Still, we made the best of it and the boys were really good, they never complained once. They managed to get out fishing again yesterday and caught just enough to bring home for dinner. I keep meaning to share our very favourite recipe for cooking fish so I'll do it right now, before I forget. It's a little bit fiddly but it's well worth it! It sounds a funny combination but you just HAVE to try it. The sauce isn't very SS but you don't have to have the sauce if you don't have the ingredients, you can just enjoy the cooked, seasoned fish on its own. YUM!

Cut the fish fillets into finger sized pieces. Mix the cornflour and all the spices together in a bowl and roll the fish in the powder. In a separate bowl, coat the pieces of fish in the beaten egg. Heat the oil in a frying pan over a high heat and quickly cook the fish without overcooking.

In the meantime, heat the oil in a saucepan and add the cup of mushrooms. Saute quickly for two minutes, then add the wine, stock and cream. Bring to the boil, simmer for 20 minutes, then thicken if needed and set aside. Add the fish to the mixture and heat through gently. Serve with noodles and green vegetables.

Another super-fast and inexpensive way to enjoy fish is to simply sprinkle your fillets with Masterfoods Barbecue Smokey Seasoning before gently pan frying. I've never met anyone who doesn't love it done this way and it's healthy too! With Liam's dietary limits things such as batter and breadcrumbs are off limits but coeliacs can enjoy both of these. Talking of coeliacs, I'm often coming across Forum threads which say things like 'Help! What can I cook for a coeliac friend?' and so on. To be honest, apart from baking, when it comes to feeding coeliacs I find the easiest way is to simply cook normal food from scratch. Try not to use anything which comes out of a tin or packet if you're not sure as these are usually the things which will include thickeners and other wheat/gluten based nasties. We hardly ever have to go to too much trouble for Liam at dinner time and most of his favourites can be found on the SS website, like French Shepherds Pie, Julie's Meat Ragout and Crockpot Greek Lamb. If we're having pasta or tacos, Liam has the meat and sauce along with the rest of us; he simply has his served on top of a baked potato or rice instead of pasta. Keep it simple with meat and veges and you can't go wrong!

Mind you, saying that I think I've got my work cut out with my latest mission. Last week I became completely glued to a TV show called 'The 100 Mile Challenge where families pledged that for 365 days they would endeavour to buy and eat food only if it was grown or produced within a 100 mile radius of where they lived. It was fantastic! They got resourceful, they got healthier, they lost HEAPS of weight and of course reduced their carbon footprints no end. Immediately I was hooked. 'I want to do that!' I said to Noel. He seemed pretty keen too. There's just two things getting in the way at the moment - the first obstacle is my rubbish health. It takes a lot of time and effort initially to source and prepare your food to make sure everyone has enough. I have to be realistic that at the moment I'm not physically up to that so I'm just going to have to be patient - not something I'm good at but at least it will give me something to look forward to. The second obstacle is sourcing food for Liam. He exists on rice and rice flour and funnily enough I don't know of any rice fields growing within 100 miles of us so we may have to amend the rules to include these staples for him. Apart from that, I reckon we could do it, no sweat! Liam thinks I've really gone and flipped my lid but I'll show him, just as soon as I'm well enough!

As so often happens, the best things in life are free and I forgot to mention two magical moments which didn't cost a cent while we were away. The first was on our last night when we were enjoying a quiet drink at the Whangamata Ocean Sports Club. Noel looked out of the window and said 'Look, it's a seal!' He's accustomed to seeing them miles out to sea, but swimming around a busy wharf? We ran down for a closer look and sure enough, it was a young seal, flippers idlly flapping around in the evening sun. Every so often he would put on a diving display and wave his tail cheekily in the air, or pop up and have a good look around at everyone. It was gorgeous, we could have watched him all night! I went down the next day to see if he was still there but no, although I did hear from others that he has been a bit of a regular over the past month, even waddling up onto the beach to check things out. Priceless!

The other magic moment was just yesterday morning when I went into the book store to get the Sunday paper and spotted The $21 Challenge book sitting on the shelf for the first time. There it was, right there on the 'new release' stand, along with Jamie Oliver and Diana Gabaldon! I tried not to look too excited, especially when the shop owner saw me and said 'Ooh, that book's been causing quite a stir already! We've had lots of customers buying it for their sons and daughters to try and help them save money'. That really made my day I can tell you, I mean, that's what it's all about isn't it, that's why we wrote the book!

The NZ media have been fantastic so far and very supportive - although I have to admit I think some 'get it' more than others. I did an interview for National Radio on Friday morning, which was quite fun, although a bit stressful. In an attempt to find somewhere peaceful away from the family I hopped in my car and drove to the beach - upon which the heavens opened and I could hardly hear myself think, all I could hear was the rain pelting on the roof of my car! Still, if you would like a giggle you can listen to it here. Just be aware I sound like Minnie Mouse on helium, you have been warned! I was also very proud to make it into the news section of yesterday's Sunday Star Times, although I did get a huge fright when I read I was a mother of four! Unfortunately that wasn't the only inaccuracy but hey, any publicity's good publicity, so they say!