Good heavens you can see why people suffer from that SAD disorder at this time of year! As I sit here this morning I can't see further than six feet across the garden thanks to the thick blanket of fog. Nushka the Jack Russell refuses to get out of bed before midday any more and I can't say I blame her. It will probably take until lunchtime for the fog to clear and if we're lucky we might get four hours of visibility before it comes down again. I do confess to being a bit down in the dumps lately. Five days and nights of rugby a week doesn't leave time to do even the most basic things. As Flylady would say, I'm suffering from CHAOS (Can't Have Anyone Over Syndrome). There's a constant trail of muddy pawprints on the timber floors, there is sawdust and woodchips throughout the house from lugging the firewood from A to B and there is washing EVERYWHERE, all in different stages of drying and sorting. As Ted Glen said in Postman Pat when the boys were small, 'Bloomin' rain, makes no end of work'. Never a truer word spoken! Speaking of the boys, after managing almost two whole glorious weeks at school, they are both home again with dreadful colds. Next week is the end of term and I have no idea what their teachers are going to write in their reports; they've probably forgotten who they are!

In addition to my 'woe is me' rant, I've put on about 5kg in record time simply from having the flu for five weeks and spending hours sitting on my bum writing. I missed out on the Huntly Half Marathon because I was sick and am due to run the Taupo Half Marathon in five weeks' time but am hopelessly behind with training. Still, it's not all bad. I have received two letters this week which have made me smile. The first one was the power bill. I can't believe how much less it is since we have been doing all the dishes by hand! Just goes to show what a power guzzler the dishwasher was in our house. Even with two dehumidifiers running and having to resort to the tumble dryer on a number of occasions lately, the power bill was around $60 less than expected. The second letter was my credit card statement, which I learned to my delight is now down to $731, which means I have paid off $2269 since February. Woohoo! The only thing which grates me slightly is that I would much rather that amount of money was sitting in the bank account but hey, hindsight is a wonderful thing. Just another month or so and I should be able to close the account for good. Yay!

I could pay it off even faster if I take a leaf out of Liam's book and get going on Trade Me. One thing I have learned from watching him go through all his stuff is how little of what we own actually earns its keep. So much of it just sits unused, day after day, week after week, month after month. Many possessions go for years at a time without seeing the light of day. It makes me wonder why on earth I bought them in the first place but makes me wonder even more why on earth we continue to hang on to them. It makes no difference to me whether it's around or not! The more I look at all the stuff about the place, the more I think how liberating it will be to get rid of it. I can't take back all the daft things I bought when I was a Sad Sally but at least I don't have to have them around as a constant reminder and if I can recoup some of the money I wasted at the same time then so much the better. It would certainly come in handy over the next few months. Next month is Ali's birthday, followed by Liam's in August and Noel's in September! Ouch! So that's my mission - to be like Liam and get rid of all the stuff which means nothing any more and no longer earns its keep. I think it's going to take me quite some time...

At least I did get one job out of the way yesterday which had been bugging me for ages - I FINALLY CLEARED OUT THE PANTRY! Granted, the rest of the house is still a pigsty but my pantry is the picture of organisation. Beforehand it was dreadful, everything was falling off the shelves and we couldn't find anything. For some reason it's always been where we keep the lightbulbs too, which is rather strange as we don't eat those! 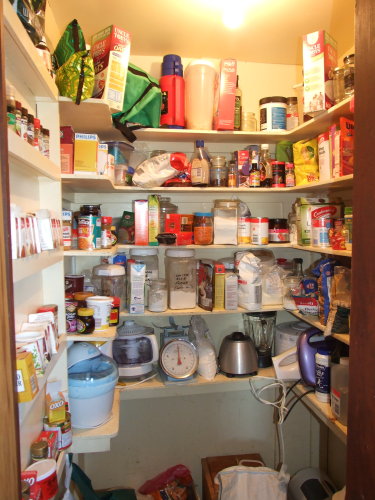 Clearing out the pantry is a daunting task at the best of times but I find the best way to do it is just take the whole lot out and put it on the benchtops. It looks even more frightening all spread out like that but it's the best way to see what you've got and then you can go through systematically and put everything back where you want it. I try to keep all my baking stuff together, all my snack stuff together, all the sauces together and so on. Of course they never stay that way for long but it's nice while it lasts. As you can see, I had a bit to get through! 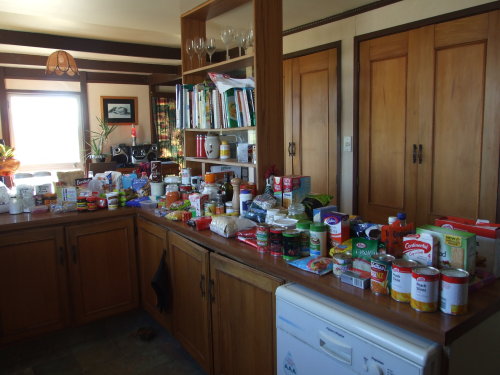 From here I was able to write out my pantry inventory, which looked a bit like this:

Phew! Judging by the look of that lot I don't think I should have too much trouble doing a $21 Challenge. However I am embarrassed to admit that the chooks also did very well out of me. I hereby confess to chucking out the following to the birds -

A cup or two of gluten free muesli (expired)

Pumpkin seeds from goodness knows when

Half a kilo of gluten free pancake mix (expired)

Buckwheat flour, oatbran, soy flour and rye flour, all of which I had gone and bought in a mad panic when Liam was first diagnosed as wheat intolerant almost two years ago. Didn't know how to use them back then and not game enough to now - although I did try using some of the soy flour to make some muffins a short while back but they looked like THE most unappetising muffins ever and have never made it out of the freezer.

Talk about throwing money away! Food clutter is just like any other clutter around the home isn't it - why buy it if you're never going to use it? Anyway, mission accomplished and chickens extremely well-fed, I was then able to put everything away in an orderly fashion. Very Patrick Bergin in 'Sleeping with the Enemy!' 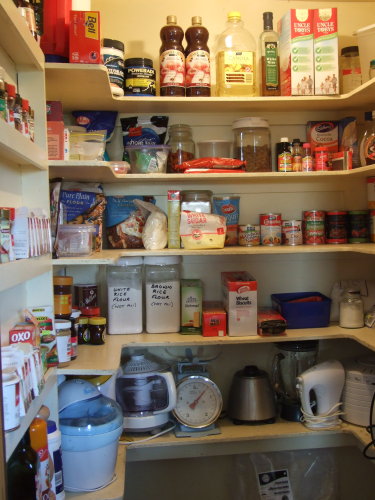 Am definitely on track to do a $21 Challenge next week - finally! Even if I have had to squeeze it in right at the end of the month, it's better than not at all. I still have the fridge and the smaller upright freezer to go through but I'm confident we will breeze in. One thing's for sure, I'm determined not to go wasting so much food like that in future!