*Grin* every $21 Challenge month this happens! As soon as I write the contents of my pantry and freezer in my blog in the lead up to a $21 Challenge I get letters from members saying 'Penny that's not a stocktake, that's a whole supermarket!' Admittedly Noel and I were quite delighted to discover just how much food we did have in the freezer the other day - and that's just one freezer, mind - we still have another to delve into! I honestly think a large freezer is one of the best investments you can make. Our freezers save us a staggering amount of money. If you don't have room for one, get rid of something else less useful and put a decent sized freezer in its place instead! Ours sits in the back porch. It is probably older than I am but is still going strong. We inherited it from Noel's grandma in 1993 and it was a good few years old even back then. It measures 1300mm x 660mm x 900mm and is full to the brim with meat. I was amazed when I took this photo this morning to realise that out of the hundreds of packages in there, just TWO have been bought from a shop - a bag of chicken pieces and a whole roast chicken. All the rest has come about through Noel's hunting and fishing exploits. I never realised how much we take it for granted until Fiona asked how on earth we ended up with so much meat in our freezer. My answer was 'Two blokes, a shotgun and a fishing rod'. 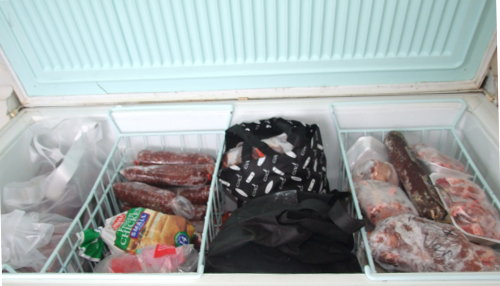 Noel learned to fill the freezer from a very young age. From the age of eight years old he loved nothing better than going hunting or fishing with his uncle and young cousin. Together they would spend hours, days at a time in the bush on hunting expeditions. Whatever he shot or caught he would proudly bring home to his mum and she would dutifully cook it and serve it up for the family. At 19 he met me. Being a keen shooter himself, Noel and my dad got on like a house on fire. I was used to dad bringing home pheasants for my mum to pluck when I was small in England so this shooting lark was nothing new to me. The difference was, I had never had to cook it before. The first time I went duck shooting with Noel I burst into tears. Didn't go down well I can tell you!

For years I struggled to eat the things he brought home. It didn't seem right to me, not coming from a supermarket and all nicely wrapped in plastic. It was too real to me. I didn't like thinking about the beautiful animal that once lived in the bush and was now served up on my plate. To be honest I was still like that until quite recently - I would serve it up to everyone else but not have any myself. But the more I learned about Noel's work in the livestock industry, the more I realised how daft I was being. I was really lucky - Noel was giving me a choice. What would you rather do Penny? Would you rather your meat came from an animal who had known nothing but complete freedom in the wild and simply had the misfortune to come across a bloke who was a good aim with a shotgun? Or would you rather it had spent its days in captivity, being pushed from pillar to post and fattened up with the sole purpose of ending up on somebody's table, before being sent to the abbatoir with a truckload of other stressed and bewildered creatures?

Even the kids prefer 'wild meat' to shop-bought meat any day. Liam's favourite all-time foods are duck, venison and scallops - all provided by Dad - and nothing beats a feed of freshly caught fish! No additives, no preservatives in any of them; just real food. It didn't cost a fortune in feed and resources to raise them, just grass and natural foraging. Venison is one of the healthiest meats you will come across, containing next to no fat or cholesterol. I've never thought about it before but I can also see it's a far more environmentally friendly way to source meat too. No real transport costs, no excess packaging. Where possible, Noel does the butchering himself. If it wasn't for him, we would never get the chance to eat venison. Deer were once a feral pest in this country. The problem was so bad that in the 1930's the government enlisted professional hunters to cull the population. During the 1960's entrepreneurs recognised the opportunity to ship to Europe where venison was traditionally a favoured dish. Hunting became so lucrative that the deer population dwindled to the point that deer farming became economically viable, at least once deer-proof fencing was invented! Today NZ is the biggest supplier of venison in the world but only 5% is eaten here, the rest is exported.. According to 2008 prices Kiwi customers wanting to buy venison from supermarkets were having to cough up anything from $36 to $99 per kilo. So going with the average price being $55 per kilo and the average amount of meat we end up with being around 45kg, Noel saves us around $2475 with every deer he brings home! Jeepers! Even if it only got put into sausages (which it doesn't) you're still looking at an easy $1000. Gold plated bangers! To be honest, I still prefer the taste of beef over venison any day, but if it keeps us well fed and is almost free, I guess I can learn to live with it!

I'm very glad - and fortunate - to have married a hunter gatherer. We never catch or hunt for more than we need and if we do have a surplus we give as much as we can away to friends and family. It's great that my kids appreciate the good food they have and where it's come from. I realise that we are in the minority living the way we do. The skills Noel has have been passed down from generation to generation and in turn he is passing it on to his sons. Liam's favourite thing in the whole world is to go out on the boat overnight with his dad and beloved dog Hubble, catching fish and cooking it on board. Ali first learned to shoot when he was 8. At 10 years old he is as capable as any adult in the bush and has the utmost respect from men three times his age who hunt with him. He is mature, responsible and his knowledge of nature and wildlife blows me away. Heck, it even blows his teachers away! He knows just how lucky he is too and finds it hard to believe that most of his friends have never eaten fish that didn't come out of a packet and weren't covered in breadcrumbs, let alone venison. His favourite place in the world is deep in the heart of the bush with his dad, learning about the world and creatures around him.

It sounds ironic, but Noel, Ali and my late father are the biggest conservationists I know. They have nothing but love and respect for wildlife - yet they all hunt them. I can see it for myself, plain as day but it's always been such a strange combination to come to terms with. Having written this blog it finally makes sense to me and I appreciate their efforts far more. My fellas are modern day cavemen; hunter gatherers who continue to provide food the old fashioned way. They save us THOUSANDS of dollars a year. The food they bring home is additive free, preservative free, styrofoam free and almost cost free. Best of all, it has been allowed to BE free. I would definitely rather eat my meat that way! It's great to know we have so much food on hand going into $21 Challenge week. We have free, fresh eggs from the chickens and the vege patch is worth its weight in gold at the moment. Bring on National $21 Challenge Month!

PS: It might sound like it but not ALL our meat is sourced from the wild. Members have been writing to ask how we save money on other meat too, particularly beef and lamb. That's a whole other blog, I'll tell you how we do it in the next one!