Greetings one and all! Huge apologies for not posting all month, I guess Christmas wouldn't be Christmas without a few dramas! They say things come in threes and I think we have well and truly had our three 'things' now. The first 'present' I received was glandular fever, which while rather inconvenient was a great relief to finally have an answer to my months of erratic health. By the time I was diagnosed I was spending every second day in bed. Makes it kind of hard to plan your festive season but it's certainly one way to save money on socialising! My only hope was that I would be well enough to cook Christmas dinner for mine and Noel's family. Little did I know that we would soon be two guests down when my mum was rushed into hospital for an emergency knee replacement! She was allowed home in time for Christmas but was understandably not up to travelling to our place, so numbers were now down to just the four of us, plus Noel's mum and dad.

Christmas morning arrived and it was nice to see the boys still up early, excitedly opening their stockings. The tradition of years gone by goes something along the lines of Noel cooking everyone a massive breakfast, then sitting down to open our presents. However this year was a little different. Breakfast done and dusted, meat in the oven and vegetables prepared for lunch, we were just about to crack open the bubbly and get on with the present opening - and the phone rang. It was the neighbours who were feeding Noel's parents' dog at their home an hour and a half away. Apparently the 12 year old dog hadn't moved in 24 hours and was unable to get up and the neighbours said the poor thing needed to be put out of its misery. As Noel's parents weren't due back home for another four days the job fell to Noel to go to their house and dig a hole so he could be buried at home. With a heavy heart he set off for the 90 minute drive in horrendous traffic, leaving poor Liam and Ali desperate to open presents but not wanting their dad to miss out on the present opening ceremony. He arrived at his destination and duly dug the hole, which was a rather large, time consuming hole as Carter the dog is a rather large Labrador. He then went to find the dog. Who upon seeing Noel promptly got up, took a pee on his car wheel and proceeded to set off for a leisurely walk around the garden. Looks like he was just sulking as he missed his owners! Noel rang us in fits of laughter and told us the good news before setting off back home for another 90 minute drive and at 2pm that afternoon Liam and Ali were finally able to open their presents and we all drank a toast to Carter and his remarkable Christmas 'resurrection!'

Boxing Day dawned bright and sunny so we all headed off down to the beach for a day of surfing and beach cricket. It was lovely to see Noel's dad playing cricket with the boys as just a few months before he had come through a massive heart operation - one which there had been a very strong chance he wouldn't survive. In 20 years of being part of the family I had never seen my in-laws look so relaxed and happy. Call it a hunch but I wanted to remember the moment so I took heaps of photos of them that day, including this one on Boxing Day night. 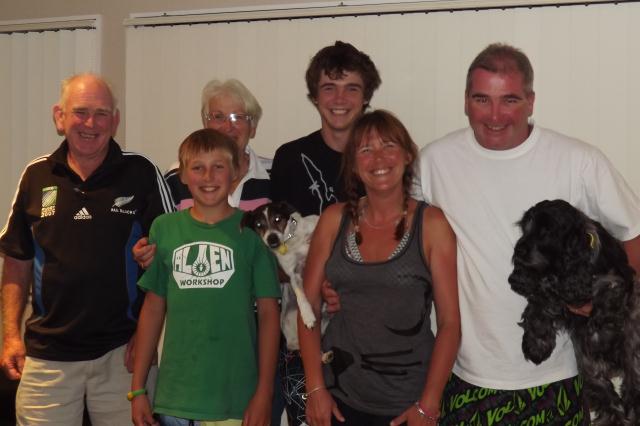 I was so very glad I took those photos because the next morning the phone rang at 7am. It was Noel's mum, telling us that Noel's dad had suffered a stroke and was being rushed to hospital in an ambulance. He couldn't talk or comprehend things properly but he did still have movement in his arms and legs. We were stunned - how could this happen? Mercifully the doctors told us this was as bad as he would get and his chances of recovery were good. He is now at home and his speech is returning - although for a few days there he did delight in doing impressions of Liam, his 15-year-old grandson who talks mainly in grunts as most teenage boys do!

So I think that's three things well and truly covered. On the whole, 2011 has been a great year. The $21 Challenge is on sale in America, how cool is that! Last New Year's Eve 2010 I weighed 72kg. This New Year's Eve I weigh in at 54kg. Sure, having glandular fever and running a marathon has had an effect as you would expect but really and truly it's all down to the SS lifestyle. No takeaways, no processed foods - just good home cooking and daily walks on the beach. Two of my favourite Christmas presents were Jamie Oliver's '30 Minute Meals' and NZ's Annabel Langbein's 'Free Range in the City' cook books. They are awesome and we've been having a ball using all sorts of yummy home grown produce and herbs from the garden. Anyone who has read my blog over the past few months will know it has been a tough year financially for us but our vegie gardens have really come into their own now and are saving us money every single day. If you have never done it I really can vouch, hand on heart that trotting out to pick beans, tomatoes, lettuce, broccoli, basil - anything - in your own backyard is one of the most rewarding feelings you can have. At this time of year when Whangamata is crazy full of people it is a real joy not to have to queue in the supermarket for hours with all the holiday makers. As usual our house pretty much looks like a youth hostel at the moment and once again our garden is proving itself indispensable. We love serving up delicious, nutritious food to the never ending tribe of boys each night and listening to all the appreciative munching. The only problem is, I think we're doing too good a job of feeding them - they keep coming back! But we wouldn't have it any other way. Although it will be interesting to see what tomorrow brings. Yes, our household Screen Time challenge starts tomorrow! I can't wait to tell the boys!

Best wishes from us all for a very happy and prosperous 2012!