Good grief, you can see why so many people suffer with that SAD disorder at this time of year. The rotten weather is making us all pretty sad around here! I've only just got my computer working again since last week's horrendous storm and I dread to think what the power bill will be like. The chinmey became dislodged in the storm on Friday and it's still blowing a gale so it's too dangerous for anyone to get up on the roof and fix it. It's so cold without the fire that we've had to drag the electric heaters out and the tumble dryer has been going non-stop because we can't dry the washing by the fire and it doesn't stay on the washing line for two seconds in this howling wind! Still, at least our home is still standing, there are so many who no longer have their homes after the Christchurch earthquake so stop complaining Penny!

We're all a bit grumpy round here though I'm afraid. Everyone's been in limbo for days, waiting to find out whether our house sale will finally go unconditional. In our infinite wisdom we signed a contract giving the purchasers 15 working days to get everything sorted before going unconditional. Which of course works out to three weeks but they said they were hoping to get everything through much sooner. No news is good news I guess but every day since signing the contract has been painful. Will they or won't they? Are we or aren't we? I know people always reckon that selling a house is one of the most stressful things you can go through and I always thought it was a load of old cobblers but I've changed my mind lately! Even the boys are suffering as this Friday is the last day of school but they have no idea whether they will be going back after the school holidays. They don't know whether they have to say goodbye to their friends this week or not. If the sale goes through, they will be starting the next term at their new school. The not knowing is horrible for everyone; not just us but also the people in Whangamata who are also hoping against hope that everything will go through and we will soon be buying their house as planned!

Still, there's not much we can do but try to be patient and keep ourselves busy. I've decluttered pretty much all I can for now until the time comes to pack - otherwise the house will be pretty empty! I have to admit, it's SO nice having less stuff; the house is so much easier to keep tidy. The boys now take care of all their own washing and I no longer have piles of dirty laundry scattered all over the house. They each have a 'wheelie bin' in their rooms and when the bin is full, they simply trundle it down to the laundry room and throw it all in the washing machine. They love the responsibility and I love having one less job to do! 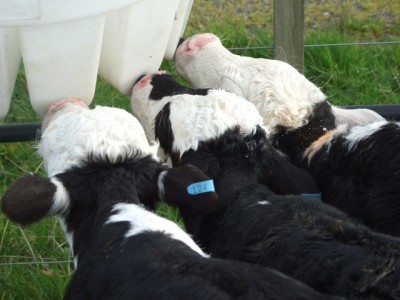 The boys are very aware that we are going to have to tighten our belts even further when we move so they are doing their best to earn some extra money while they still can. Both of them have a 'Trade Me' box for selling their own things but their big moneymaker is rearing calves. Two years ago they both bought a calf and paid $100 for each one using money from their savings. They fed and grazed them all that time, then took them to the sale last week. Ali's Friesian sold for $850 and Liam's Hereford for $965! Not a bad profit! They decided that once we move to the beach they will no longer be able to rely on this as a source of income so thought that they had better make the most of it while we still have land and went straight out and paid $100 each for two more! If there's one thing that pushes Liam's buttons its money; not least because it's now only 10 months before he can learn to drive, eek!

Liam has always been so good at negotiating and getting money out of people that Noel reckons he should do his job when he leaves school! As it is he's been doing Enterprise Studies this term and has been having great fun selling things to his fellow pupils and teachers. Recently he was asked to come up with an idea of something he could sell at school for only $1, whilst still making a profit. In typical Liam fashion, he didn't tell me he needed to have his project ready to sell until the night before. 'Mum, I have to make toffee apples by tomorrow morning!' he said on the way to rugby training. Nothing like short notice! Still, I thought toffee apples were a great idea and duly said that I would go to the supermarket and get what he needed while he was at rugby. I rang my mum, who read out the recipe for toffee apples over the phone while I dashed around picking up the necessary supplies. All was going well until we reached the Cream of Tartar at $6 for a tiny pot! This would take the shopping list for toffee apple supplies to over $30. Considering the recipe only made eight and Liam could only sell his toffee apples for a dollar, he stood to lose at least $22! A change of plan was needed. Liam suggested selling strawberries dipped in chocolate. I told him in no uncertain terms that people would not cough up $1 for one measly strawberry, so he said 'OK, we'll sell them in lots of five. At $4.99 a punnet, this would only make two lots of five. This idea would cost Liam twice as much as he made and that was without the chocolate!

I picked him up from rugby training empty handed. In desperation, he grabbed a packet of chocolate caramel muffin mix from Mr Patel's on the way home. 'Right' he said. 'We don't have long so I can make these myself. They cost $4.79 and make 12 so I'll definitely make a profit here!' He took them to school the next day in fear and trepidation. Was anyone going to want to buy his muffins? He needn't have worried. He came out of school waving an empty baking tin. 'They didn't even make it out of the staffroom! The teachers bought the whole lot! I didn't even have to TRY to sell them!' he grinned. Buoyed by his success, he made another 24 on Monday night, but this time he made banana choc chip ones from scratch as he figured he stood to make even more or a profit if he made them using ingredients we already had. He was right. It cost Liam a total of $4.32 to make the muffins from scratch. 'That's twice as many muffins for less than the price of one packet!' he beamed. Over the next two days, Liam took his muffins everywhere. He sold them on the school bus, he sold them at break times and the teachers still proved keen buyers too! By the end of the experiment, Liam had made a profit of $26 - more than $20 more than his fellow class mates. Most importantly, he learned some great lessons along the way!