Well, I survived Friday's MRI! To be honest I felt pretty smug actually. I found the whole thing a breeze, compared to the big, burly man who went in before me and had to be sedated. It was a little like being inside a space invader game, with all the beeping and carrying on. The worst part of the whole ordeal was being forced to listen to Kenny Rogers through my headphones (apologies to any Kenny Rogers fans out there!) - actually I tell a lie, the worst part was trying to keep still. First I got in trouble for moving my eyes too much and blurring the scans, then again when I fell asleep and woke up with a jolt. Hardest of all was not laughing when I was being chugged around inside my little tunnel like a washing machine. It's always the way isn't it - the more you have to keep still, the more you find EVERYTHING starts itching uncontrollably. I did discover to my horror somewhere through the procedure however that perhaps I was a bit more scared than I had previously thought. It was all Kenny Rogers' fault. I groaned inwardly when he started singing as it's a standing joke that my mother in law loves Kenny Rogers and we always have to listen to his festive album with Dolly Parton every Christmas. Then I got to thinking about Noel and all of a sudden it hit me. What the heck was I doing here? What if something really was wrong? What if we weren't going to grow old and grey together after all? And before I knew it I was blubbing like an idiot behind my Hannibal Lecter style mask, all the while telling myself 'THINK OF SOMETHING NICE! THINK OF SOMETHING NICE!' so I didn't get told off for blurring the scan pictures again.

Incidentally the scan pictures are absolutely fascinating, if rather horrific at the same time. Yes, one of the joys of paying through the nose for a private MRI is that you get to take your pictures home on a CD to gross out your family and friends. I have no idea whether everything looks like it's supposed to but at least nobody can call me brainless from now on because I have plenty of photographic evidence to the contrary. So, armed with my souvenir CD we made our way home, with the assurance that the results can be expected on Wednesday. I thought that was the hardest part of the day over with, but unfortunately not. Liam arrived home from school to inform us that Ali had been beaten up on the school bus by a much older child. He hadn't come home because he was staying at a friend's house for the weekend and I was frantic. When I finally managed to talk to him on the phone he could hardly talk. He had been punched in the face twice and had a bleeding mouth, sore nose, a swollen lip and a couple of wiggly teeth. It turned out that there had been a case of mistaken identity. Another, younger boy had made an extremely offensive racist comment to a 15 year old from the high school as he got off the bus. He thought it was Ali and the poor fella got smacked in the chops for nothing!

It sounds awful and it was hardly what we needed on top of an already stressful day but rest assured the older boy has been dealt with and severely punished by his family for using violence to deal with his anger. We knew the family well enough not to have to call the police in. Ali was typically philosophical about it all and said at least it was a lesson learned that you can't get away with saying what you like to people. Although he would have much preferred it had he actually said something to warrant a punching in the first place! While I was disappointed in the older boy, our two families got together and it turns out that there is a lot of racial taunting and bullying going on in the school bus every day and understandably it's really making some of the students miserable. The boy had simply had enough, unfortunately he took out his frustrations on the wrong person. The matter is now in the hands of the school as they try to get to the bottom of who is causing the problem. While it's a huge shame that poor Ali got to bear the brunt of it, at least something positive has come out of the situation, as without this, we parents would not have been aware of the awful behaviour and atmosphere on the bus. I feel dreadfully sorry for all of the kids who have been dealing with this, day in, day out and hope now everything is out in the open, their school days will get off to a much better start. You may be wondering 'where is the bus driver in all this?' I wondered the same, until I spoke to the bus company today. They informed me that he is deaf and wears a hearing aid. He was totally unaware of Friday's incident as he is accustomed to the kids' high spirits and simply turns his hearing aid off when they get too noisy!

Anyway, change the subject Penny, you're supposed to be talking about saving money! Which I'm finding quite easy at the moment, medical bills aside. I can't remember the last time I drove my car and on the very odd occasion I need to put petrol in it, I only put $20 maximum in it now, rather than filling up the tank and it still lasts me for weeks! All those little trips to town have gone out the window as it's just too much effort these days; it's a great way to realise how easily you can live without things and that I CAN find something for the cats to eat or cope without soda water for another day. I can also highly recommend wearing pyjamas as much as possible, it really cuts down on the washing!

I might not be going to Australia any more but I have to say the weather here is absolutely beautiful lately. We've never known such a dry winter and spring! We have already had to start watering the vege garden and Noel was amazed to have to water his fruit trees this week. For September in our neck of the woods, that's unheard of! We enjoyed the first of our home grown peas for dinner a couple of days and Liam was amazed to learn that he DOES actually like peas and ate every one! Only as long as they're fresh ones though, he won't touch frozen ones. I have to admit, the difference in taste is quite startling. Ali's potatoes are already bursting out of their barrel and he is having to top them up with more soil every other day. His vege garden is well under way now! I promised some photos ages ago and never got round to putting them up, so here is the story so far! 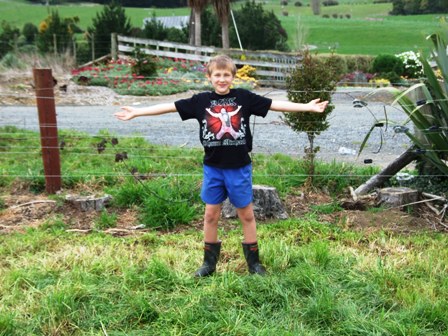 Here is Ali standing over his proposed vegetable plot; a narrow strip in the corner next to his dad's potato patch. As you can see, he's got some work to do! 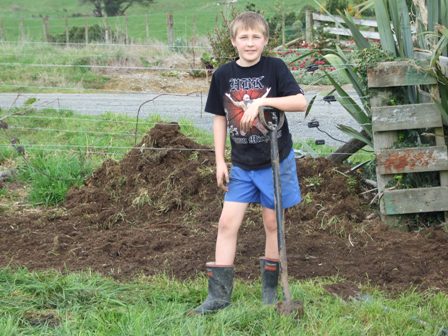 Digging up what used to be part of a paddock is no mean feat! Fortunately Dad kindly mowed the area first, to make the going a little easier. 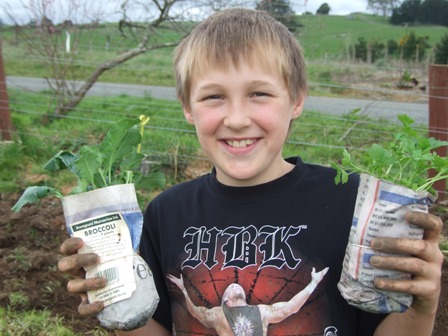 This is what it's all about! Ali chose some tried and trusted seedlings from the supermarket (Kiwis we have had amazing results with these broccoli plants from Pak n Save - just make sure you get the ones in newspaper, not the ones in punnets!) He also went with his Dad to Mr Patel's and chose some seeds, which he is growing in an old aquarium until they are big enough to transplant. 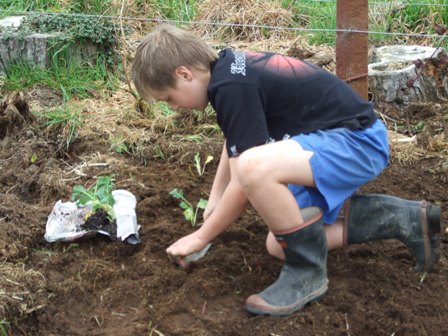 Now for the fun part - getting your hands dirty! Here Ali is planting the first of his vegetables - broccoli, tomatoes and parsley (for his scrambled eggs, very important!) Beans are to follow shortly.

Not bad for an afternoon's work! It's a fair sized garden for a little bloke so he'll be kept busy but he is adamant that nobody is allowed to help; he has to do everything himself. Already the plants are rocketing away and as I mentioned it's a little dry here already so Noel went to Mitre 10 and bought a little irrigation set for $6.95, which he installed yesterday. With 15 metres of hose it's the perfect length to water Ali's garden and Noel's potato patch too. Noel planted cucumber, courgettes Russian Red tomatoes, sweetcorn, pumpkin and broccoli in his own garden yesterday and apparently the two of them still have heaps more to plant. I can see between them we're going to be very well fed. What a team!