Well it's November, which means 1950's Month according to my calendar! As far as I'm concerned, the timing couldn't be better as living here feels a little like going back in time - but only in a good way. Since we moved here the boys haven't turned on the Playstation once - not once! For Liam in particular this is unheard of but as he says 'I never get bored here, there's so much fun stuff to do everywhere. Why would I want to be stuck inside playing Playstation?' Ali has always been an outdoor kid but it still made me smile when he raced in from school the other day shouting 'Mum, can I go out with my mates right now? We're going to pick loquats!' Sure enough he returned an hour later with a bag full to overflowing with juicy, golden loquats. I had never eaten loquats before but now I'm addicted to them. Will definitely have to plant our own tree!

Both boys are relishing their new-found freedom. Here, all the school kids meet together every afternoon at the wharf for a swim or just to 'hang out' and chat. The favourite pastime of choice is jumping high off the wharf and splashing into the ocean below, or off a specially made floating pontoon. It's a happy mix of all ages, the older ones look out for the younger ones and everyone is welcome. Liam realised after a couple of days of waiting to chat to his new friends on Facebook that kids just don't do that here. They're too busy having fun in person! And rightly so - what kid in their right mind would want to spend their days in front of a screen when you've got this place as your playground? 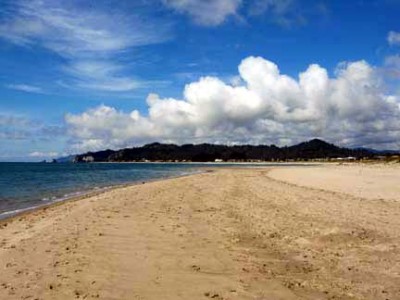 Every afternoon is spent swimming, skim boarding and walking the dogs along the beach - and it's not even summer yet! There's nothing Hubble and Minnie like better than their daily visit to the beach. In fact as you can see here, Hubble gets so excited he jumps for joy! 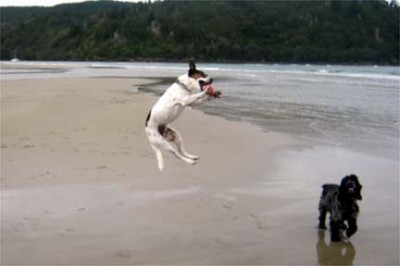 We took both dogs fishing with us for the first time last weekend. Hubble is a seasoned fisherman and knows the drill but it was Minnie's first time. She flopped down asleep in the hull of the boat as we headed out to sea and her face was a picture when 10 minutes later she popped her head up and saw she was surrounded by nothing but water! Unfortunately the fishing has been diabolical since we've been here and we've only caught enough for two dinners in as many weeks, but at least everyone's had lots of fun trying!

While the kids are loving all the independence their new location has brought them, I do admit to having a little trouble adjusting to it! Several times I've had to give myself a good talking to and say 'Let them go! They're not going to get run over if they ride their bikes on the road or get kidnapped on their way to school!' Admittedly this is one of the reasons I love Whangamata so much. It's one of the few places these days that still has that old fashioned town feel, where you can let the kids roam free without too much worry. Even so I'm still never happier than when I see their faces appear at the gate when they arrive home!

The only disadvantages I've found of living here so far are:

2: Towels. I have never washed so many towels in my life! It must be at least three loads a week, where I used to wash one load a fortnight!

Still, I guess the reason for both the abundance of sand and towels is because we've all been out having fun, so I will happily learn to live with both!

And, idyllic as life may be, there are still going to be a few challenges ahead which will make us need to sharpen up our SS skills. The first one is the power bill. Liam now has an en suite in his room and loves nothing more than taking a power shower in his own bathroom. Twice a day. For up to 20 minutes at a time. Of course it's a huge novelty at the moment but one which we could see would quickly turn into a very expensive pastime! So I took a tip from the Vault and bought him a cheap kitchen timer. He sets it for five minutes when he jumps in and when the bell rings, he has to hop out - or else!

As for water, that's something we've never had to pay for or had a limited supply of before but we'll be paying for every drop we use from now on so I've been freaking out every time I see a dripping tap! I'm also going to start scouring the Vault for the many water conservation tips as when summer gets into full swing we won't be allowed to use a hose to water the garden and so on. Am not particularly handy myself but I've already started nagging Noel to set up an SS style system for recycling our grey water from the washing machine to keep the plants watered. You can bet your life I'll be putting a bucket in Liam's shower too, so I can catch every spare drop!

I've already mentioned some of the ways we've been saving since we've been here but I've decided to put really put it to the test and compare our 'old life' with our new one. I dug out an old sewing box and have renamed it 'The Box of Accountability'. A long name but its use is simple. During September, I got the whole family to keep every single receipt from every transaction they made and pop it into the box. We did this for a whole month. It didn't matter whether the purchase was only 10c, it still went in the box, and if we didn't have a receipt we wrote down the amount on a piece of paper along with what it was for, and put that in the box.

September was a good month to choose because it was a pretty average month for us expense-wise. I didn't bother trying to get everyone to keep dockets during October because we had so much going on and had a lot of large one-off expenses that it wouldn't have been a good month to compare. However, now we're into November, we can start chalking up the changes! I haven't so much as taken a peek at our dockets from September but once December 1st comes round we'll take every single piece of paper out and compare how our spending has changed since moving to Whangamata. I called it the 'Box of Accountability' because now our mortgage is bigger, we all need to be accountable for every cent we spend. I can't wait to see the results!