I'm almost scared to admit it - but I think the pity party is officially over! Just in the nick of time too I must say as I have a very important appointment to keep this weekend. Back in May I promised my little friend Louis that I would run Auckland Marathon for him to try and help raise $8,000 for the insulin pump he so desperately needs. Believe me, I don't try and kill myself for just anyone but Louis is one special seven year old. In just a few short months I have seen him go from needing around 20 insulin injections a week for his Type 1 diabetes to a massive 35 but you'll never see him make a fuss. He has fingertips of steel from having to prick them up to eight times a day to check his own blood glucose levels. He has an inquisitive mind, piercing brown eyes and a ready smile - but what gets me most of all is that he has unwavering faith. Faith that his mum, dad, teachers, doctors and nurses are all doing their very best to keep him well and, bless his heart, absolute faith in me that I will run 42km for him this Sunday and help him to get that pump. I can't blame him for being excited - it might look like a glorified cell phone to the likes of you and me but to Louis it means going from 35 needles a week to just three. He might not be able to run the marathon with me but I know he'll be the one cheering the loudest when I reach the finish line, along with his mum, dad, grandparents and adorable sister Maia. 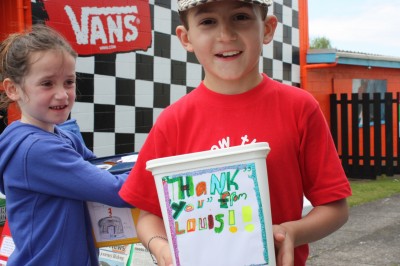 It might sound crazy but I honestly can't wait! After all the months of training I just want to get out there and do it. Especially after the weekend we just had. Not only was it a long weekend in NZ but it was also the Rugby World Cup final (which incidentally we won, did you know?! YAY ALL BLACKS!) Spirits were high, the streets were teeming with people and we thought it would be the perfect time to get out amongst them, shaking buckets and seeking sponsorship for the marathon. We learned a lot about money that weekend. The first thing we learned was that asking people for money, whether you know them or not, is a very, very hard thing to do. All these months I've been quite happy pounding the pavements for a good cause but it suddenly occurred to me that if I didn't actively get out there and in people's faces I would be running on Sunday for nothing. Well - nothing but a rather drastic weightloss program. The thing was, once I got out there among the crowds I couldn't do it. I just stood there, next to my fantastic display boards, smiling inanely and saying nothing. Somebody had to do something! And they did. We were all well outside our comfort zone but finally Louis's mum Tara and our lovely friend Linda realised that we were getting nowhere fast and found their voices. And that was it. From then on people couldn't wait to put money in Louis and Maia's buckets. It was amazing how many people came up and shoved notes in our hands, telling us they also had Type 1, or their children or grandchildren did. We met some truly wonderful people. One lady had no money on her but had a $4.00 winning scratch ticket and she gave us that. Another man owned a beachside bed and breakfast and donated a free weekend for us to raffle as a prize. What was really humbling was the amount of children and teenagers who were all ferreting around in their wallets and took the time to read our boards when all the adults were walking past. 'Poor little guy!' they would say at the sight of Louis holding a week's worth of needles.

The generosity of the people of NZ, Australia, America and even England and Ireland has been amazing. In Whangamata I get free physio, free running socks, even free energy drinks. The local newspaper has followed my mission for four consecutive weeks and even That's Life! magazine has printed a story in this week's issue. Wherever I run people wave, beep their horns or give me the thumbs up. I can't put into words how awesome it is to feel as though you have the support of a whole town behind you. This weekend has also been a great learning lesson for the kids - both Tara's and mine. We told them from the start when shaking their buckets that it didn't matter if people only had 10c to spare, it was still valuable and would still add up. In today's cashless society it was indeed a frequent sight, as people rummaged around apologetically in their bags, asking 'You don't do Eftpos by any chance, do you?!' I'll never forget the smile on Liam's face as he held his bucket out for donations for his cute little friend. Not only did our children learn that there are a lot of good people out there, they learned what Fiona has been telling us Simple Savers for years - that little bits really do add up. Later as Louis and Maia painstakingly counted the coins under Tara's watchful eye they were delighted to discover that in less than 48 hours we managed to raise almost $1200, taking my total raised so far to around $4,000. Half way there!

So next time I post I guess I'll be a marathon runner! Or a hobbler, or crawler, or something. But one thing's for sure, the whole experience has been fantastic and I would do it all again in a heartbeat. Remind me to tell my toes that when I finish on Sunday! As mentioned, I have been training since May so if you would like to catch up on my training blog or learn more about Louis and his family, you can do so by visiting http://www.leggingitforlouis.wordpress.com/ or our 'Legging it for Louis' Facebook page. See you on the other side!