Wow, the recession is really starting to make its presence known in my cosy little world. I'll admit it, I've been feeling all snug and cushioned from the GEC (Global Economic Crisis) here in SS land. I'm alright mate, what with growing my own food, keeping the lights turned off and doing all the countless other things us Simple Savers do. It's also a little hard to believe there's a recession on when the shopping malls are still crawling with people and you can't even get a car park. However it seems I can no longer stick my head in the sand; the recession is here and it's really hurting a lot of people.

This became all too obvious last week when I rushed Ali to the 24 hour medical centre after dinner. He and his brother were out wrestling on the trampoline (kids don't try this at home) when Liam dropped Ali and he landed badly. Panic ensued when we thought he had broken his neck - mercifully this turned out not to be the case but the fact he could barely move and his shoulder was jutting out like a tennis ball was still rather worrying. So we whizzed up the motorway and arrived at the 24 hour clinic at 8.30pm to find it had closed at 8pm. The 24 hour medical centre was now a 12 hour medical centre, 'due to financial constraints' the large sign on the door said. It was mayhem. We could see through the glass doors that the waiting room was still full of people but they weren't letting any more in. A crowd gathered behind us outside, all carrying sick children in pyjamas and peered in hopefully but continued to be ignored. One angry dad banged on the door until the receptionist gave in and came to see him but she still politely refused to let him in. For Ali and me it was a bit inconvenient but no huge drama; we could go home, give him pain relief to get him through the night and bring him back in the morning but I felt dreadfully sorry for all the other sick children and their families. A sad sign of the times and a big wake up call.

Every day now I hear more stories of how the recession is affecting people I know. At the weekend we were shocked to hear our local Retravision store had suddenly closed down. They had only just merged with another large appliance retailer in an attempt to stay competitive but still they couldn't keep afloat. Over the months we had watched as their range of products had got smaller and smaller. There is a shopping complex less than an hour away from us houses four of these retailers all in a row. Dick Smith, Noel Leeming, Bond and Bond and Heathcote Appliances. For longer than I can remember they have been empty of shoppers. People can't afford to buy large appliances any more and if they do buy them, they are getting them second hand or from The Warehouse. How long can they keep going like this? It was such a shame to hear of Retravision closing. For years it had been built up by a local family who had always gone out of their way to provide the best prices and service and always gave back to the community. I wonder what they are going to do now?

A recent visit to the hairdresser was an eye opener too. I had gone to that salon regularly over the years but there was no need to make an appointment any more, I was able to just walk in off the street. The hairdresser told me it was the same for the other half a dozen salons in the town. They are all so quiet, half the time they have been shutting up shop at 12 noon. People aren't getting the expensive stuff like foils and highlights done any more. At least as she said cheerfully, people always need their hair cut. It's the beauty salons who have been really suffering. As soon as times get tough, the first things to go are the acrylic nails, the eyelash tints and the deluxe facials. Just that morning the travel agent from across the road had come over to the hairdresser in tears to cancel her appointment. She had gone into work as usual, to be told she no longer had a job, to clear out her desk and go.

Even Lance the carpet cleaner was a revelation to talk to last week. I actually felt guilty for getting him out in the first place but I had tried everything to remove the stain and nothing could get the dye out. It felt like a huge luxury, calling out a carpet cleaner when I know so many people are struggling to put food on the table. He agreed that business had indeed slowed but was feeling pretty positive overall. Offices and other places still always need their carpets cleaned, not to mention all the plush city apartments which are being vacated at an alarming rate because their occupants can no longer pay the extortionate weekly rent now that their businesses are crumbling around them. Lance considers himself one of the lucky ones and after listening to him, I think he is too. He's a big fan of American author and social critic James Howard Kunstler and through his writings saw the GEC coming two years ago. So Lance started a vegetable garden. He now has six thriving vege gardens and his kids, who used to like nothing better than a feed at McDonalds are now at their happiest getting their hands dirty digging up potatoes. He says it's the best thing he has ever done for his family.

I know what he means. I'm so glad my kids know Simple Savings. I hope it will protect them from making some of the expensive mistakes our generation has made. I don't want them to grow up to be one of those families living hopelessly beyond their means, buying a house twice as big as they need or thinking they have to have a 40 inch plasma TV to look successful. It was interesting hearing Liam and Alex talking about the recession the other day. My boys can't understand how the whole world can possibly run out of money. Why don't the money factories just print some more for goodness sake? Alex explained that the problem is, there wasn't enough money in the first place. Too much of it was imaginary. The little people happily borrowed and borrowed from the big people because they were led to believe they could have whatever they liked. The big people had heaps of money and would help them get what they wanted. But what the little people didn't realise was that the money they were borrowing wasn't real. The big people were borrowing too, from even bigger people and on and on it went. Everybody thought the money they were borrowing was real, but it wasn't. It never existed. Alex described it as a house of cards. When the people at the top started to topple, everyone else fell down with them, all the way to the bottom. I thought it was a pretty good explanation and certainly backed up what Lance said about the people in the penthouses. Alex himself has just been told he's going to lose his after school job at the local gym. With nobody able to afford memberships the gym is almost empty apart from a few classes. It no longer opens on weekends as it can't afford to pay staff to work all day when nobody is coming in to use it. As a result, Alex and the two other students who work there will cease to be employed.

If there's one person who's doing very well for himself at the moment however it's 12-year-old Liam. Duck shooting season is here for six weeks in NZ and he announced last night that duck and goose were high on his list of favourite foods. In fact his favourites are all wild and put on the table for virtually nothing - duck, goose, venison, fish and scallops. Not a burger in sight! He's more adventurous than I am, I'll give him that. He's also extremely good at making money for himself on Trade Me. For example, in the school holidays Ali decided he would like a fish tank in his bedroom. That was easy, we just cleaned up an old one from the shed and it was soon as good as new. In fact it looked so good that Liam decided he wanted one in HIS room. He had been selling bits and pieces on Trade Me to raise money for a new Playstation game but decided he would rather have a fish tank. So he shopped around and found a fantastic 35 litre tank on a stand, complete with everything he needed to get set up for $129 - 56% less than the usual retail. A few fish carefully selected by price and temperament and Liam's mission was done. Both boys spend many happy hours 'fish watching' in their rooms - I would much rather they sat mesmerised by those than a Playstation!

He hasn't stopped there though. From then on emerged a continuous barrage of 'stuff' he wanted to sell. As I sit and write there are currently three baskets full of 'stuff' behind me, either waiting to be listed, currently listed, or sold and ready to post. In the last three weeks he has made no less than $530 and is still going! The ladies in the Post Office always make a fuss of him and praise him for being so motivated when he goes in there to post his trades. He seems to have a knack of knowing what people will buy and what is a realistic price. He puts a lot of time and effort into his trades and it's really paying off - although for what, we don't know yet. He just likes to have some money in the bank for when he DOES find something he wants! Smart boy - if only he was as motivated when it came to his homework. The ironic thing is, there's supposed to be a recession on, yet all these things are being snapped up and flying out the door as fast as he can list them. I mean, they're hardly essentials are they? Still, far be it from me to discourage them when Liam's doing so nicely! 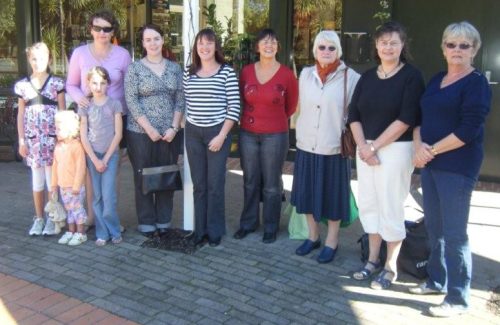 OK Penny, you've done the recession to death, let's finish on a more positive note! We had a wonderful get together of Simple Savings members on Sunday, I think there were eleven of us in the end! Left to right in the photo is Tracy (3 Girls from the Forum) and her three girls, Marie, me, Heather, Pat (Gran), Rosanne and my mum Ann (Pompom Ann). Beverley was behind the camera! We wandered around Hamilton Gardens in the sunshine paying particular attention to the Kitchen Garden, the Sustainable Garden and the Herb Garden where we sniffed and nibbled on so many fragrant leaves we needn't have brought lunch! Still, we stopped in the end for a picnic and a chat. None of us had ever met before (except me and my mum of course!) but conversation was easy and everyone got along so well. Tracy's three daughters were adorable and so well behaved and as they tucked into all sorts of home made goodies (including muesli bars the girls proudly told me they can make themselves), I thought to myself how lucky they are to grow up the Simple Savings way, with a loving, savvy mum. I also thought to myself at the end of the day, isn't it incredible how this single website has brought so many people together? I would never have met any of these wonderful people if it wasn't for SS!