I've come to realise over the last day or two that there are always ways and means of making a bit of extra money if you really put your mind to it. Take the $21 Challenge for instance. I've always thought of it as a way of 'finding' money when you think you don't have any but I think you can also class it as a way of making money too. It's money you have to work for in order to hold on to it. It's money that you wouldn't have otherwise because you would have already spent it on something else. Any money you manage to save is like a tax free bonus isn't it? The $21 Challenge is something you achieve for yourself and your family, it's something really positive that you can be proud of. I know I always feel pretty proud every time I complete one! Someone else I'm really proud of is Liam, aka Mr Money Magnet. I've lost count of how much he has made on Trade Me over these past few months but he's got to be getting close to $1000 by now. He has successfully completed over 80 trades (all with positive feedback he proudly tells everyone). He was getting a bit worried recently that he was running out of things to sell but as you can see from this cheesy-grinned photo he's still got quite a few more to get through! 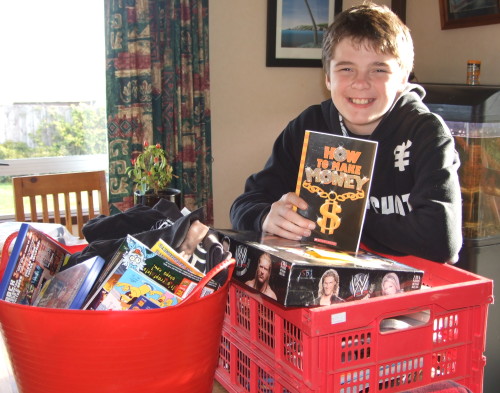 Some people do really well selling things online, some don't. Ali has no luck selling his stuff online because he always charges moonbeams! So I asked Liam to share his tips for successful trading. While his brother doesn't listen to him you never know, it may help someone else!

1. Be realistic. Keep your reserve low if you want things to sell. Some of my highest bidding auctions have stemmed from $1 reserves. People think ‘it’s just $1’ and before you know it, you’ve got a bidding war. Often they make higher prices than I would have charged for a 'buy now!'

2. Take the time to describe. People want to know exactly what they are buying. Why are you selling the item? Is there something wrong with it? They want reassurance that you're not selling rubbish or a dud. Give your reason for selling where possible, e.g. ‘outgrown’ or ‘upgrading’. Describe what you are selling as best you can. I hate copying all the text from the back of games or DVDs, it takes me ages sometimes but it's always worth the effort. Photos sell, but so do words.

3. Sell things in bundles. A really good way to sell things is in 'bundles' or collections of things which compliment each another, such as magazines, trading cards, DVD’s or games. It gives the buyer value for money and is a brilliant way to declutter several items at a time!

4. Try your luck. You never know what other people are looking for. Don’t be scared to list an item, no matter how small. I thought nobody would be interested in my All Blacks or Pokemon cards but people went crazy over them! Just because you don't think something is cool or useful any more, doesn’t mean nobody else will. Even a couple of dollars here and there all adds up and it’s better than having them sitting around doing nothing at your place. You would be amazed at some of the things that sell. One man’s trash is another’s treasure so they say!

5. If at first you don’t succeed. Relist! Don’t be disheartened if your auction doesn’t sell the first time. You never know who’s going to come along so it’s always worth relisting and it’s an awesome feeling when that stubborn item finally sells. I listed one DVD about six times and it never even got any views but last week everyone wanted to snap it up!

Good on you sunshine! Liam's way of making money is tried and true but for something completely different, how about this for a job? You may remember me saying a few blogs back that Alex was losing his part time job at the gym due to the recession. I thought it was a real shame so was determined to keep an eye out for something else for him. It didn't take long for something to crop up, although it wasn't exactly what I had in mind! This is Alex dressed for work in his new job - as a scarer! 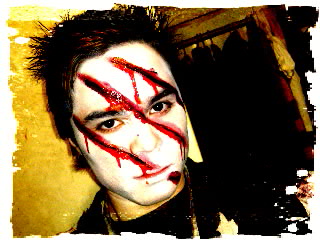 We managed to get him a job at Spookers haunted attraction - Australasia's only 'Scream Park!' The hours are long - from 7pm until 2am at weekends but he has an absolute ball. Who wouldn't enjoy scaring complete strangers half to death! Even going to the interview itself was an experience. Spookers is located in the grounds of what used to be Kingseat Hospital, a notorious mental institution. The grounds are like a maze and there we were, crawling along in the dark, looking warily left and right for anything scary. Very Scooby Doo! It didn't help our nerves when a huge grey dog came out of nowhere and ran out in front of the car either! Still, we eventually arrived at the converted nurses home and took our places in the gothic banquet hall among the other potential new scarers. Everyone was asked to put on a mask and give it their best shot and try and scare everyone. The only problem was, they all seemed to have it in for me! I had never been there before but I would recommend it to anyone with a sense of humour and nerves of steel. Who knows, you may bump into Alex (or he may bump into you just when you least expect it!) The set up is absolutely fantastic and I desperately want to go there again for real - if only I wasn't so scared!