Well, I think this has to be a first, even for me. I know I can be slack but I don't think I've ever missed a whole MONTH of blogging before, have I? Apologies for my absence but I fear part of the reason for my tardiness is I've been putting it off because I know this one is going to be so blooming hard to write. I know, it's not often I'm lost for words, I've been writing since I was seven years old! I still vividly remember the very first time I saw my name in print; it was in 'Bunty' magazine and I won a prize for writing a poem about my dog. After that I plagued the poor editor with poems about my cat, my grandmother's budgie, whatever I could think of. Since then, I've never really stopped.

When I first started writing a blog, I didn't even really know what one was! But as a new member of Simple Savings and a Sad Sally of the highest order, I was being transformed into a Happy Hanna at an amazing rate. These tips REALLY worked! I wanted to shout it from the rooftops how good they were so that everyone who came to visit the website would give them a go and know SS really could help them. I tried nagging Fiona to write a blog but with two toddlers and a business to run she said she didn't have time - but I could if I wanted. So I did. I would never have dreamed that seven years later I would still be doing it, I've never managed to keep a diary longer than a couple of weeks before!

I also never dreamed that anybody would actually READ it. But people did and over the years it feels as though I've made a lot of wonderful friends. In fact, if you've read my blog you probably know me better than the majority of people who actually know me in real life! When Penny Wise first appeared on Simple Savings, my boys were just six and eight years old. Now they are 14 and 16. I have loved sharing the details of their growing up (although they would probably absolutely kill me if they knew some of the things I had told you!) I have been lucky enough to meet some of you in person and I have received many, many incredible emails but none so memorable or life changing as the one I received back in 2006 from Barb telling me of her very first $21 Challenge. Who could have possibly imagined where that would lead? It still never fails to blow me away just how many people the $21 Challenge has helped; just the other day I was sent a lovely letter from Work and Income NZ, telling me they have incorporated the $21 Challenge into their Smart Choices program with hugely successful results. Amazing!

I remember the very first time I went to Australia and met Matt and Fi in person. There we were, sitting in the lounge with a leisurely glass of wine and Matt said to me cheekily 'Now, you do know you're with Simple Savings until death now, don't you?!' I didn't have a problem with that, far from it! I could never imagine doing anything else. But writing the $21 Challenge book with Fiona made one of my dreams come true. Ever since my 'Bunty' days that is what I have wanted to do more than anything; write books. Everyone has a novel in them, so the saying goes and over the past couple of years I've realised I have at least three, all demanding to be let out. Whether any of them will actually be any good remains to be seen! But there's only one way to find out.

So I have made the decision to leave Simple Savings and see if I can write those books. I'm hoping this blog doesn't sound too stilted and impersonal but the truth is I don't want to stop and think too hard about the people I'm leaving behind or I'll turn into a big slushy mess. I have enjoyed every moment of being Penny Wise and I'm sure I will still get called Penny for a long time to come. I'm sure people will continue to quickly slam the doors on their pantries and try to hide the contents of their shopping trolleys when they see me too! But it's time to move on, if I don't do it now I never will. 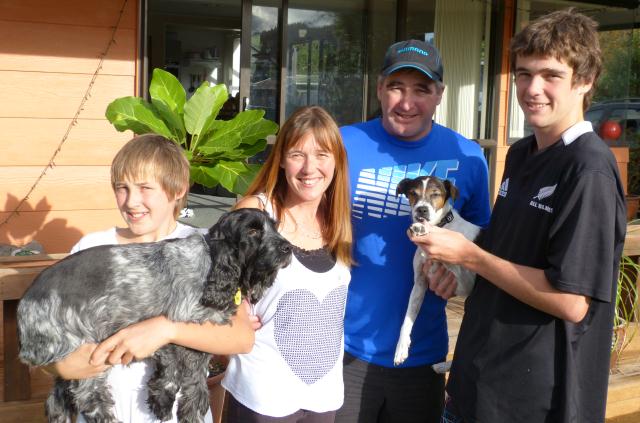 Thank you to each and every one of you who has popped in to read about us over the years. It's been a wonderful ride and it has been a privilege to be able to share it with you. Thanks to you I have never felt alone or unsupported in our journey. I have learned an astonishing amount since joining Simple Savings. From the day I joined it really did change my life. For anyone who isn't familiar with our family, the house we are standing in front of in the photo is our dream house at the beach, where we moved 18 months ago. We are living proof that anything is possible!

From now on, I'll be leaving the money talk to Fiona and the team but if any of you are gluttons for punishment and would like to continue following our family you are very welcome to do so in my brand new blog! Yes, after all this time not waffling on about myself is proving a hard habit to break, so I have started a new blog called Laughing is Free and I would love for you to visit. I can't promise it will change your life and I can't promise it will save you money but it might give you the odd chuckle - and I CAN promise not to write any poems about my dog, cat or grandmother's budgie. You are also very welcome to check out my Facebook page, don't be strangers!

But for now I guess this is it. From all of us a fond farewell and all the best for a very prosperous future. Each and every one of us is incredibly lucky to have Simple Savings in our lives, so do make the most of it.

Ladies and gentlemen, Penny Wise has left the building :-)